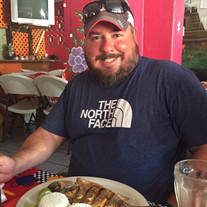 William Trevor Worthen was born in Corsicana, Texas July 22, 1972 to Bill and Gail Worthen. He is survived by his wife Jennifer Phillips Worthen of Hewitt and his daughters, Ashley Diane of Sherman, Avery Noel of Hewitt, and Mary Grace of Hewitt, his parents Bill and Gail Worthen of Corsicana/Richland Chambers, and his uncle Bert Rader of Lake Whitney. He was preceded in death by his grandparents Cal and Bea Rader and his grandmother Libbie Reynolds. Trevor grew into a man who never knew a stranger and was always ready to help anyone. He was a rescuer of turtles, cats, dogs or anything or anyone in need. He loved cooking and eating and telling stories. He loved hunting, fishing, traveling and the sea but most of all he loved his family, his “four” girls especially. He was happiest cooking up a pot of something good, sharing it with family and friends and spicing it up with good stories and jokes. He was deeply loved by all of us and will be greatly missed. He served in the intelligence division of the army which led to his career as a supervisor for underwater ROVs (remotely operated vehicles). His work allowed him to travel the world, explore all but two of the world’s oceans and to make friendships across the world. Tribute from his daughter Ashley Diane: My Dad never met a stranger. He and I once stopped to get a drink. There were two men sitting near us and within 30 minutes we knew everything about them and we were friends. He could talk to anyone about anything and was genuinely more interested in other people than himself. He loved camping. Before my sisters were born, he took me on a camping trip to Lake Caddo. We were rained out and had to sleep in the car. He had the uncanny ability to find humor in every situation. I can only imagine what he would say say about about passing away during a time like this when the world is in panic and chaos. He would definitely give us a grin. He was a true source of light in the world. It was appropriate that he found a line of work that took him all over the world. He was inquisitive, loved to read and never wanted to stop learning new things. He genuinely loved his family and wanted to make sure we all had good times. I have always believed that death is rest and that rest is strength in disguise for the next adventure. He is with God. His story is just beginning. Memorial services will be held at a later date because of the need for limited social contact during the corona virus pandemic. Trevor’s favorite organization was: https://www.wildliferehablorena.org/ Wildlife Rehab Lorena 697 Monument Trail Lorena, Tex 76655

William Trevor Worthen was born in Corsicana, Texas July 22, 1972 to Bill and Gail Worthen. He is survived by his wife Jennifer Phillips Worthen of Hewitt and his daughters, Ashley Diane of Sherman, Avery Noel of Hewitt, and Mary Grace of Hewitt,... View Obituary & Service Information

The family of William Trevor Worthen created this Life Tributes page to make it easy to share your memories.

Send flowers to the Worthen family.