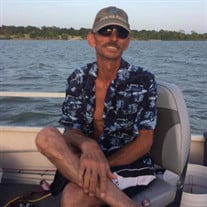 William Leslie Mann, 53 of Purdon, Texas passed away May 17, 2021 at his residence. He was born February 6, 1968 in Kansas City, Kansas to Robert Leslie Mann and Gail Earlene Van Meter Mann. He attended North Beaton Church of Christ in Corsicana. He... View Obituary & Service Information

The family of William Mann created this Life Tributes page to make it easy to share your memories.

Send flowers to the Mann family.