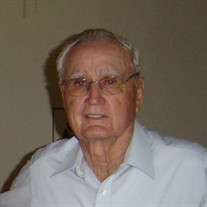 William “Harold” Elmore went home to see his heavenly father on Sunday, October 17, 2021 at age 94; he resided at Sonoma House Assisted Living in Carrollton, Tx. Visitation for family and friends will be held Thursday evening from 6 - 8pm at Griffin-Roughton Funeral Home is Corsicana, Tx; the Celebration of Life service will be Friday, October 22, 2021 at 10:00am at Frost Baptist Church in Frost, Tx. Internment will follow at Richland Cemetery in Mertens. Harold was born on February 27, 1927 to William A. Elmore and Essie Yarbrough Elmore. He was the second of 9 children. He is survived by his brother, Kenneth Elmore and is preceded in death by Doris Perry Clanahan, Laverne “Sis” Walles, Francis Bell, Bobby Elmore, Billy Elmore, Betty Cox and LouAnn Kyte. He married his wife, Robbie Ponder Elmore, July 9, 1948; she preceded him in death in 2018 after almost 70 years of marriage. He is survived by two children: Lloyd Elmore (wife Karen) and Nancy Van Tiem (husband Dennis); two granddaughters: Tonya Phillips (husband Lance) and Brittany Hutchens (husband Branson); and five great-grandchildren: Davis Szanto, Landon Hutchens, Mattie Phillips, Hayden Hutchens and Leah Hutchens. Harold served in the U.S. Army from 1945 to 1947 holding the rank of Corporal; he received the Army of Occupation Medal World War II Japan Clasp and was stationed in Korea. When he returned home, he met and married Robbie Ponder and raised 2 children (Lloyd and Nancy). They farmed and ranched in the Mertens area, then purchased a service station/tire business which they operated for several years before returning to farming and ranching. They were active in their church and community. They showered their children, granddaughters and great-grandchildren with love. They moved to Hurst, Tx in June of 2013 to be near their children. Harold moved to Carrollton, Tx in 2018 after Robbie’s death; he enjoyed making new friends, the many activities, playing chicken foot dominos, watching sports, a good joke and most of all visits and phone calls from family and friends. He will be dearly missed. Memorials may be made to Frost Baptist Church, 101 W. Stroud Street, Frost, TX 76641.

William &#8220;Harold&#8221; Elmore went home to see his heavenly father on Sunday, October 17, 2021 at age 94; he resided at Sonoma House Assisted Living in Carrollton, Tx. Visitation for family and friends will be held Thursday evening from... View Obituary & Service Information

The family of William Elmore created this Life Tributes page to make it easy to share your memories.

Send flowers to the Elmore family.