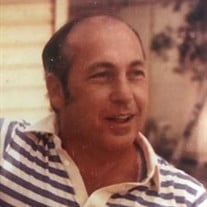 William Wesley "West" Allen passed away at his home in Milford, Texas on the evening of January 29. Wes was born March 11, 1931, in Hillsboro, the second of six children born to Joe Wesley and Violet Rene Allen. His siblings include sisters Sara Francis of Hillsboro, Alene Robertson of Austin, Irene Wilson of Irving; and brothers Joe Allen of Irene and John Allen of McKinney, all of whom survived him. Wes grew up in Corsicana where he met the love of his life, Ann Noelene Turner. He joined the U.S. Navy in 1948 and proudly served on the carrier USS Philippine Sea. He and Ann were married in Corsicana on July 17, 1951, while Wes was on leave. After he was honorably discharged in 1952, he and Ann settled in Dallas and started their family. They were blessed with three children: Delana Faith (Lana) Brown of Salado, Kelly Candace Buckner of Atlanta, Georgia and Wesley Allen, Jr. of Milford. Wes sought employment with the Ford Motor Company and began what became a long and productive career with the company. He was instrumental in deploying and operating production lines at Ford plants in Dallas, Atlanta, Ontario, Canada and Norfolk, Virginia. After retirement, Wes and Ann eventually decided to move back to Texas to be near family. They bought a home in the quiet community of Milford. Tragically, Ann was diagnosed with what proved to be terminal cancer shortly after their move and she died on February 26, 1999. Wes remained in Milford to be near his son and best friend, Wes, Jr. Wes was a man of short stature but enormous heart. He possessed an indomitable spirit, boundless energy and a contagious can-do attitude which he channeled into his work and into helping others. He never met a stranger and never turned down an opportunity to lend a hand to someone in need. In addition to his siblings and children, he is survived by five grandchildren, six great grandchildren and a host of precious nieces, nephews, other extended family and friends. A memorial service will be held at 1:00 pm, February 10, at the First Baptist Church in Milford, followed by a reception at the church. Memorial gifts should be directed to the recipient of the donor’s choice.

William Wesley "West" Allen passed away at his home in Milford, Texas on the evening of January 29. Wes was born March 11, 1931, in Hillsboro, the second of six children born to Joe Wesley and Violet Rene Allen. His siblings include sisters... View Obituary & Service Information

The family of Wes Allen created this Life Tributes page to make it easy to share your memories.

William Wesley &quot;West&quot; Allen passed away at his home in Milford,...

Send flowers to the Allen family.