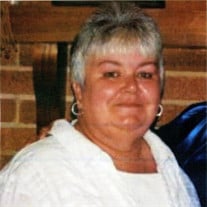 Vickie Onstott Tomlin, 65, lifelong resident of Corsicana, Texas went to be with our Lord and Savior on Wednesday January 12th, 2022. Vickie was born on July 27, 1956, to Louise and Bill Onstott, Sr. She graduated from Corsicana High School in 1974 and married Steve Tomlin. Vickie and Steve started their family right away, having two daughters, Wendy and Staci. Vickie was a stay-at-home mom, owned a catering business and was a cosmetologist while her girls were little. She was very involved in their lives serving on the PTO, coaching their softball teams (The Green Machines), being their campfire leader and anything else her girls were involved in. When the girls were a little older, she joined the work force and quickly found her place. She started as a secretary at Atlas Architectural Metals which later became Texas MPP, an anodizing corporation in Corsicana. Her mentor, Dieter Schmidt, lit a spark in her to learn all she could about the anodizing business. She quickly advanced to office manager and a little later, she became plant manager of the Corsicana location. Vickie was a natural leader. Years later, she worked as the Patient Services office manager, at Medical Arts Clinic, in Corsicana. She had a passion for helping and serving others, and this job allowed her to do just that. Until her passing, she still remained very good friends with many of the ladies that she worked with at the clinic. Vickie had many talents. She enjoyed cooking, baking & cake decorating, making flower arrangements, and making anything with her hands. Vickie had many titles throughout her life. Many people, who aren’t actually related to her, have always called her Aunt Vic. She was the type, if you knew her, you loved her, and you were family. Of all of the titles Vickie had through the years, none were more special than being called “Meme”. She has 2 grandsons, Caleb and Joshua, and she lovingly often referred to them as her “angels” or her “heartbeats”. Becoming a grandmother was the best time of her life. She was just as active in the boy’s lives as she was Wendy and Staci’s. You would always find her sitting front row at the baseball field (coaching from the stands, of course) cheering her boys on, or yelling across the football field, being their #1 fan. Meme and Papaw loved to vacation or go camping with the kids. Vickie is also referred to as Meme, by many of the boy’s friends, as well. She loved them as her own. Vickie is preceded in death, by her father and step-mother, Bill and Elizabeth Onstott, mother and step-father Louise and Donald Sikes, brother, Willam Carl Jr., and sister, Deborah Clower, mother & father-in-law, Betty and Glynn Tomlin. Vickie is survived by her husband Steve, daughters, Wendy Vasquez and Staci Ward, grandchildren, Caleb Vasquez & (Kaitlin Benton) and Joshua Vasquez, sister Scharlene Brown, brother, Duane Onstott Sr. and wife Debbie, brother-in-law, Richard Clower, sister-in-law Pat Boyde and many nieces, nephews, cousins, aunts and uncles. Vickie leaves many dear friends behind as well, including lifelong friends, Mona and Rodney Gorden. Visitation Saturday evening from 6 - 8pm at Griffin - Roughton Funeral Home. Funeral service will be Sunday, January 16, 2022, at 2:00pm in the Chapel at Griffin - Roughton Funeral Home. Burial will follow at Oakwood Cemetery.

Vickie Onstott Tomlin, 65, lifelong resident of Corsicana, Texas went to be with our Lord and Savior on Wednesday January 12th, 2022. Vickie was born on July 27, 1956, to Louise and Bill Onstott, Sr. She graduated from Corsicana High School... View Obituary & Service Information

The family of Vickie Onstott Tomlin created this Life Tributes page to make it easy to share your memories.

Send flowers to the Tomlin family.