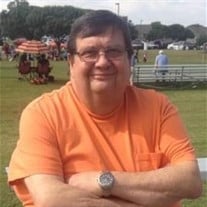 Timothy V. Tipton, age 70, passed away peacefully February 19, 2020 while in Dallas Methodist Hospital. He was born in Keokuk, Iowa on May 26, 1949 to Vernon “Tip” and Elizabeth Tipton of Kahoka, Mo. He spent the first ten years of his life residing in Kahoka and after his father’s death he and his mother moved to Liberty, Mo. He graduated from Liberty High School in 1967. He attended Adam State Collage in Alamosa, Co and in 1969 moved to Spencer, Iowa to attend Iowa Lakes College. He met Gloria Carlson at Trinity Lutheran Church in Spencer. After graduation Tim moved back to Liberty to work. Tim and Gloria were married in Spencer, Iowa August 10, 1974. They lived in the Kansas City, Mo area where Tim was employed by Variform Plastics, in Quality Control, for 10 years. In 1980 they moved to Knoxville, Tn where he worked for Plexco and was transferred to Corsicana, Tx in 1988. He worked for Plexco, later known as Performance Pipe (Chevron) until his retirement in 2005. Knowing he wasn’t truly ready to retire, he took a position with Industrial Pipe Fittings (now known as Plasson) in Houston, Tx. They lived in Pearland, Tx until his retirement in 2016. After retirement they moved back to Corsicana. Tim was preceded in death by his parents, and his father and mother in law, Bertil and Marian Carlson. Left to cherish his memory is his wife Gloria, daughter Tara Tipton, Son Timothy Tipton, daughter in law Olivia Tipton, 3 granddaughters, Hailyn, Henley and Harlow, along with many cousins and a host of wonderful friends from everywhere he had lived and worked. The family would like to thank the caring nurses and doctors on the 4th floor of Schenkel Tower at Dallas Methodist Hospital and the kind care he received through Vitas Hospice at Dallas Methodist. Visitation will be Thursday February 27, 2020 from 6-8 pm at Griffin-Roughton Funeral Home in Corsicana. A memorial service will be in the Griffin-Roughton Chapel on Friday February 28th at 1 pm, Dr. Danny P. Reeves, officiating. Burial will be in Oakwood Cemetery in Corsicana.

The family of Timothy Tipton created this Life Tributes page to make it easy to share your memories.

Send flowers to the Tipton family.