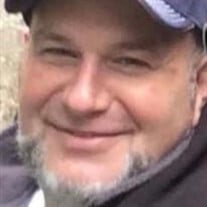 On December 31, 2020, our world was no longer large enough to contain the enormous heart and life force that Tim Hartley was to so many of us. Tim Donald Hartley Jr. was born on July 25, 1966 in Corsicana, Texas. He graduated from Corsicana High School and Navarro College. He also attended UT Tyler. Tim worked for TXU from 1989 to present day (Vistra Energy). Tim is preceded in death by his dad, Tim Donald Hartley Sr.- who Tim thought hung the moon and the stars. The amazing memories of Tim will continue to be cherished every moment by his wife and forever best friend and soulmate , Martha , and his son Tristan , who was his absolute beloved mini-me and pride of his life, his precious mother, Wanda Hartley, brother, Doug Adler and sister-in-law Nancy, his cousin Jeff Smith (who was always another brother to him) and his wife Denna, his nieces, Chelsea Adler Griffith and Callie Adler Burleson, who both had him perpetually wrapped around his fingers from the day they arrived on this earth, his cousins which he loved immensely , his mother-in-law, Peggy Wetegrove and husband, Bob, and countless number of lifelong and work friends , and golf buddies. Also, by Livvie, who for those that knew him well, know his dog, Livvie (Lulu) was his best girl, his favorite riding buddy and grabbing- a - burger together partner. Tim began working for TXU in May of 1989. That very same day he met his wife Martha there, and unknowingly they embarked on their lives together that hold more joy and memories than they could have ever imagined at the time. They married on April 4, 1992, with the extra blessing that his mom officiated the wedding. Tim and Martha loved each other with their whole hearts and balanced each other in a way that comes with years of weathering everything together, good and bad, and always finding ways to laugh together in moments that others may not. Tristan was the love of their life, and Tim was the best daddy you could ever imagine. They also deeply loved so many fur babies through the years and took in several homeless puppies to share their love of dogs. Tim truly enjoyed living life, every day was a new day for him, and he sought to live it to the fullest. His smile, infectious laughter, humor, and charm made anyone feel at ease the moment you talked to him-it is no exaggeration that there was no such thing as a stranger to him. He had the ability to make anyone feel loved and important. If Tim were your friend, you knew it and that would not ever change. But of course, you also had to be ready for some serious ribbing, because he was the master at giving anybody a hard time and we all loved him that much more for it. He was also an amazing mentor, leader, second dad and true North for so many throughout his life. Our world will never be the same without him but could never be as rich in the fact that we had him. Fly High Timmy- and get that that hole in one on Heaven’s greens. Donations may be made to Project Pawz or Corsicana Animal Shelter in his name. Masks will be required to be worn at the service, and all social measuring distancing guidelines will be followed. A Celebration of Life for Tim Hartley will be held Thursday, January 7, 2021 at 1:00pm at the First United Methodist Church in Corsicana. A Private Committal Service will follow for family at Oakwood Cemetery. Those who want to pay their respects may do so on Wednesday from 9:00am - 6:00pm at Griffin - Roughton Funeral Home. Pallbearers will be Tim Young, Chris Norch, Bobby Carpenter, Richie Cutrer, Dan Owen, Timmy Green. Honorary Pallbearers will be Rick Prater, Rusty Hitt, Chisholm Smith, Mike Grimland, Ray Camarena, Michael Roman, and Andy Dotson.

On December 31, 2020, our world was no longer large enough to contain the enormous heart and life force that Tim Hartley was to so many of us. Tim Donald Hartley Jr. was born on July 25, 1966 in Corsicana, Texas. He graduated from Corsicana... View Obituary & Service Information

The family of Tim Hartley Jr. created this Life Tributes page to make it easy to share your memories.

Send flowers to the Hartley family.