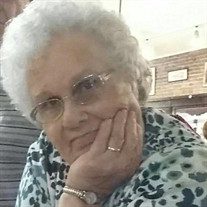 Thelma Jean Crosson passed away October 3, 2021, in Wimberley Texas at the Deer Creek Rehab facility with members of her family at her side. Jean as she preferred to be called was born September 11, 1932, to Roy Lee and Lula Mae Keith in Bay City Texas. Jean grew up in Sargent Texas on land farmed by her father. At the age of 18, she met the love of her life Harold Glenn Montgomery and married in November 1950. Glenn was called to the ministry and Jean supported him throughout his career as a minister and pastor in the Assembly of God church. They served as pastors in Pearland Texas, Fairfield Texas, Katy Texas, and Nixon Texas. Jean was the epitome of a pastor’s wife and served faithfully in all aspects of the ministry. Jean was noted for her caring and compassionate disposition and her willingness to give to others long before entertaining the thought of her own needs. These traits were exhibited when dealing with parishioners, family members, and complete strangers if she saw a need. After many years of service to our Lord, Glenn was taken home to his reward in 2006 and Jean soldiered on alone until being reunited with an old family friend Lonnie Crosson at a family gathering. Lonnie and Jean both being widowed found comfort in each other’s company and eventually married in March 2012 and enjoyed these past years with genuine love and fondness for each other. They enjoyed travel, church, gospel singing, and family. Lonnie was a steadfast spouse and loyal companion of the first order and he made Jean’s last years joyful and fulfilled. Jean was preceded in death by her parents Roy and Lula Mae Keith, her brother Sonny Keith sisters Edna Keith, Jessie Crosson, and Neta Frankum daughter Lonna Crosson Higgs and her beloved great-grandson Blake Sandefer. Jean is survived by her husband Lonnie Crosson, her sister Wanda Frankum and husband Bobby, Dorothy Irwin and husband Gary, her brother Bobby and wife Sandra, her son David Montgomery and wife Amy, her daughter Bren Montgomery Carr, grandchildren Christi Montgomery, Justin Montgomery and wife Jessica, Chad Jackson and wife Susan, Todd Jackson, Tyler Williams and wife Mackenzie, Sarah Williams, Kathryn Chan and husband David Chan, John Carr III, and a host of great-grandchildren, nieces, and nephews. Funeral Services will be held at 2 pm on October 8th 2021 at Taylor Brothers Funeral Home 2313 Avenue I, Bay City, TX 77404 A visitation will be held at 6 to 8 pm on October 9th 2021 at Griffin-Roughton Funeral Home 450 E Main St, Fairfield, TX 75840 Interment will be held at 10 am on October 10th at Fairfield Cemetery for immediate family only.

Thelma Jean Crosson passed away October 3, 2021, in Wimberley Texas at the Deer Creek Rehab facility with members of her family at her side. Jean as she preferred to be called was born September 11, 1932, to Roy Lee and Lula Mae Keith in... View Obituary & Service Information

The family of Thelma Jean (Keith) Crosson created this Life Tributes page to make it easy to share your memories.