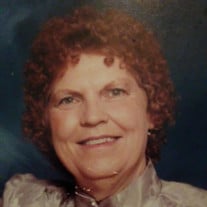 Shirley Temple Worley Reynolds was born on March 23, 1941 to C.E. and Rosey Worley in Carthage, Texas. Shirley was a high school graduate, earning her GED while in her late fifties. Shirley married her beloved husband Jerry Wayne Reynolds on August 10, 1957. She and Jerry had 2 sons, Clay Lynn Reynolds and Wade Lee Reynolds. Shirley was a stay at home wife and mother for many years. She and Jerry lived in Lubbock early on and moved to Irene around 1967 and then to Frost, Texas. Shirley worked at the Frost Sewing Factory as a seamstress, as well as the Frost Baptist Church in the nursery where she was known as Miss Shirley to many little ones. Shirley enjoyed wrapping and filling shoeboxes for the Samaritan's Purse Shoebox Ministry at her church. Shirley was preceded in death by her parents, husband Jerry, son Wade, grandsons Chad and Drew, and great-grandson Hagen Thetford. Shirley is survived by her son Clay Reynolds and wife Stephanie, daughter-in-law Tina Reynolds, grandchildren Ashey, Colby, Emily, Erin, Jason, Nikki, and Stormie and 14 great-grandchildren. She is also survived by her sisters, Pat Hammett and Earnestine Young and brother David Worley. Shirley was a loving and devoted wife, mother, and especially Granny. She will be missed by her family and friends Visitation will be Sunday, May 24, 2020 from 1:00pm - 2:00pm at Frost Cemetery Pavilion. Graveside Service will follow at 2:00pm at Frost Cemetery Pavilion with Bro. Jason Wilder officiating.

The family of Shirley Reynolds created this Life Tributes page to make it easy to share your memories.

Send flowers to the Reynolds family.