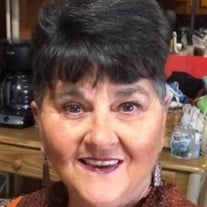 Sheral Capwell Aten Phillips, 67, of Corsicana, Texas, went to her heavenly home on December 30, 2021. She was a beloved wife, mother, daughter, sister, Nana, Aunt Sissy, and friend. She was born in Lamesa, Texas, on April 8, 1954, to Orville (Dutch) Capwell and Jackie Motley. Sheral was raised in Lamesa and after graduation worked as a hairdresser, bookkeeper, payroll manager, executive assistant. During this time, she obtained numerous higher education degrees which ultimately led her to arrive in the field of secondary education. She was preceded in death by her parents Dutch Capwell and Jackie Motley and brother Lee Capwell. Sheral is survived by her husband Ervin Phillips of Corsicana, sisters Geneva Branch of Selah, Washington; Lisa Capwell of Springdale, Arkansas; brother Ronnie Motley of North Carolina; sons, Tommy Phillips of Corsicana; Steve Phillips and wife Glyn Phillips of Barry, Texas; Jay Dee Aten and wife Valery L. Martin of Purdon, Texas; daughter Paula Kloecker and husband Fritz Kloecker of Corsicana. Grandchildren, Leslie Newman and fiancé Kyle Hayes of Corsicana; Ivy Phillips of Houston, Texas; Katy McConal and husband Sean McConal of China Spring, Texas; Abigail Roberson of Lubbock, Texas; Gabriel Kloecker of Corsicana, and Jaxson Aten of Purdon, Texas. Great-grandchildren, Cadon Trull and fiancé Kamren Thompson of Corsicana; Tatum and Teagan McConal of China Spring, Texas, and many special nieces and nephews. Sheral was always charging around trying to get something done, whether it was gardening, bee keeping, educating, making special treats for her grandchildren, or being a farm and ranch hand. She was up to any task, especially trips to town to get parts or run errands for family or friends no matter how full her own plate was, and of course, these tasks were all done with a giant cup of Diet Dr. Pepper in tow. She loved her many friends and family, and sometimes she could be kind of boisterous! She will be dearly missed by all who knew her. The family would like to give a special thanks to Freddie Ann and Jimmy Mirike, Clint Andrews, and the Navarro County Sheriff’s Office. Visitation will be Wednesday, January 5th from 10-11am at Griffin-Roughton Funeral Home. Funeral Service will be held at 11am in the chapel at Griffin-Roughton Funeral Home. Burial will follow at Resthaven Memorial Park. Pallbearers will be Rusty Andrews, Clint Andrews, Chasyn Andrews, Duwayne Davee, Rodney Faucett, Donnie Trull. Link for livestream funeral service: http://webcast.funeralvue.com/events/viewer/66440

Sheral Capwell Aten Phillips, 67, of Corsicana, Texas, went to her heavenly home on December 30, 2021. She was a beloved wife, mother, daughter, sister, Nana, Aunt Sissy, and friend. She was born in Lamesa, Texas, on April 8, 1954, to Orville... View Obituary & Service Information

The family of Sheral Capwell Aten Phillips created this Life Tributes page to make it easy to share your memories.

Send flowers to the Phillips family.