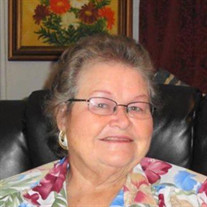 Senie Beulah Vick Perry (Granny Perry), 77, of Corsicana, went to be with the Lord on Wednesday September 2, 2020, in her home. She was born January 6, 1943 in Athens, Texas, to Henry Ellis Vick Sr. and Senie Beulah Weston Gracey. Her family moved to Ennis, Texas when she was 3 years old, where she attended school. Senie was widowed with 3 children at the age of 21. She met her husband when he came home from the service in 1965 at the Eureka Community Center. They married April 9, 1966 and together they had 1 child. They moved to Corsicana in 1971 and have raised their family in the same home for the last 49 years. Senie is proceeded in death by her parents, Henry Ellis Vick Sr. and Senie Beulah Weston Gracey. Siblings Lillie Mae Estes, Estelle Hammonds, Elvin Vick, Gladys Swan, Gracie Douglas and Louetta Wickliffe. Son Jack A. Knight and grandson TJ Webb. Senie is survived by her husband, Clemons Eugene Perry, of 54 years. One daughter, Pamala Price Chapman and Thomas, of Corsicana, two sons, James A. Knight Jr. of Corsicana and Chad Perry and Patricia, of Corsicana. Brother, Henry Ellis Vick Jr. of Streetman and sister, Onzelle Barber, of Pennsylvania. 16 grandchildren, 29 great grandchildren and 1 great great granddaughter, Amaiya Jasmine. Also, numerous nieces, nephews, cousins and many more she took under her wing and called her own. Visitation will be at Griffin-Roughton funeral home in Corsicana, Texas, Friday, September 4and Saturday, September 5 from 6-8pm. Graveside service will be held Sunday, September 06, 2020 at Rice Cemetery, officiated by Elvin Sikes Sr., at 2pm. Pallbearers will be Chris Chapman, Brandon Knight, Joseph Perry, John Chapman, Joshawa Perry and James Buchanan. Honorary Pallbearers will be James Perry, Cody Knight, Justin Knight and Robert Perry. Granny’s go to quote: “I can do all things through Christ which strengtheneth me.” Philippians 4:13 God and Family were all that mattered to Granny and she will be greatly missed

Senie Beulah Vick Perry (Granny Perry), 77, of Corsicana, went to be with the Lord on Wednesday September 2, 2020, in her home. She was born January 6, 1943 in Athens, Texas, to Henry Ellis Vick Sr. and Senie Beulah Weston Gracey. Her family... View Obituary & Service Information

The family of Senie B. Perry created this Life Tributes page to make it easy to share your memories.

Send flowers to the Perry family.