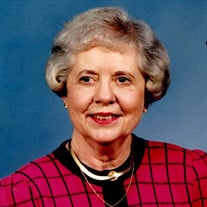 Ruth Carolyn Dublin Blackburn of Corsicana went to be with her Lord and Savior on December 23, 2021. She was born on August 29, 1928, to S.L. and Amanda (Dollie) Dublin. A lifelong resident of Corsicana, Carolyn attended local schools and graduated from Corsicana High School as a member of the class of 1945. She attended Baylor University, majoring in Radio and obtaining a teaching certificate. While at Baylor, she was a member of the Athenean Club (now Kappa Kappa Gamma), serving as president her senior year. While teaching second grade at Lee Elementary, she married Edgar Wright Blackburn on December 2, 1950. She left her teaching career in 1953 to be a full-time mom but returned to the classroom in 1964 at Drane Middle School where she taught Speech and Language Arts until her retirement in 1989. She attended First Baptist Church of Corsicana from birth and was active in Sunday School, a member of the Homebound Visitation Team, and a participant in the church's Women's Council. She was a long-time member of the Quintilian Club, served on the Kinsloe House Board, and belonged to the local chapter of Alpha Delta Kappa, a professional organization. Carolyn was preceded in death by her parents and her husband Ed, to whom she was married for 55 years. Left to cherish her memory are, daughter Carol Blackburn Smith and husband David of Dallas, son Jim Blackburn and wife Janet of Corsicana. She is also survived by her grandchildren, Kyle Gregory Hayes and fiancé Leslie Newman of Richland and Holly Katherine Simmons and husband Trent of Richardson. Great grandchildren include Kenzee Denice Hayes, Jonah Thomas Simmons, Annabelle Ruth Simmons, and Samuel Alexander Simmons. Adopted into the family and surviving her is special caregiver and friend, Lois Ballard. In addition to Lois, the family is forever grateful to Bobbie Walker, Debra Sims, and Patrece Williams whose loving care enabled her to remain in her home in recent years. Funeral Service will be held at First Baptist Church of Corsicana at 11:00am on Thursday, December 30, 2021. Visitation will be prior to service starting at 10:00am. Burial will be at Oakwood Cemetery. in lieu of flowers, the family request that donations be made to The Humane Society of Navarro County P.O. Box 1731 Corsicana, Texas 75151 or First Baptist Church 510 W Collin Street Corsicana, Texas 75110

Ruth Carolyn Dublin Blackburn of Corsicana went to be with her Lord and Savior on December 23, 2021. She was born on August 29, 1928, to S.L. and Amanda (Dollie) Dublin. A lifelong resident of Corsicana, Carolyn attended local schools and graduated... View Obituary & Service Information

The family of Ruth Carolyn Blackburn created this Life Tributes page to make it easy to share your memories.

Ruth Carolyn Dublin Blackburn of Corsicana went to be with her...

Send flowers to the Blackburn family.