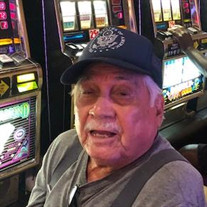 We lost a husband, father, grandfather, great grandfather and a friend to many when Roberto Contreras passed away February 16, 2021 at his home in Corsicana after a valiant effort in battling a long term illness. Roberto was born in Jimenez, Chihuahua Mexico on November 20, 1933. He loved life and spending time with family, especially his grandchildren, whom he adored with all his heart. Roberto became an orphan at the tender age of 13. Through his drive and determination, he became a self taught construction foreman, leading up to managing his own business. Always dreaming big, Roberto took a leap of faith and migrated to the US in the 1960's. After working many years at Lynn Manufacturing, Tom's Foods and JELD-WEN/Summit Windows, Roberto decided to retire to spend more time with family. He was well known for being a prankster and a joker. He was not the tallest, but was the toughest. He loved going to the casinos, fishing with his sons, loved to watch boxing matches and had a love/hate relationship with the Texas Rangers. He was a God fearing man with Christian values that he instilled in he children along with the value of hard work, treating people with respect and education. Roberto's motto was "If you are going to do something, do it right." He is survived by his loving wife Lydia Contreras. Daughters, Maria Lemus and husband Rafael, Araceli Poston and husband David, Lydia Munoz and husband Cesar, Maria Elena Contreras, Maria de la Luz Contreras and Esther Noodwang and husband Jack. Sons, Mario Contreras and wife Isabel, Luis Contreras and wife Elisa, Robert Contreras and wife Nancy, Enrique Contreras and wife Pilar, David Contreras and wife Luz Maria. He is also survived by numerous grandchildren, great grandchildren and extended family. He is preceded in death by three sons, Jose Raul Contreras, Ruben Contreras and Roberto Contreras II. The family request anY donations in honor of Roberto to be made to Navarro County Ambulatory Care Association, PO Box 518 Corsicana, Texas 75151. "I am the resurrection and the life. The one who believes in me will live, even though they die; and whoever lives by believing in me will never die." John 11:25-26 Visitation will be 6-8pm Tuesday, February 23, 2021 at Griffin-Roughton Funeral Home. Funeral service will be 10 am Wednesday, February 24, 2021 at Griffin-Roughton Funeral Home Chapel with Deacon Lewis Palos officiating. Burial will follow Calvary Cemetery. Pallbearers will be Luis Contreras, Mario Contreras, Robert Contreras, Cesar Munoz, David Poston, Rafael Lemus. Link to live stream: http://webcast.funeralvue.com/events/viewer/48802

We lost a husband, father, grandfather, great grandfather and a friend to many when Roberto Contreras passed away February 16, 2021 at his home in Corsicana after a valiant effort in battling a long term illness. Roberto was born in Jimenez,... View Obituary & Service Information

The family of Roberto Contreras created this Life Tributes page to make it easy to share your memories.

Send flowers to the Contreras family.