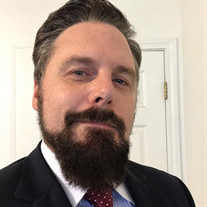 ROBERT LOUIS SCHNABEL JR. left this life on Sunday, August 15, 2021 at age 48. Robert was born in Haines, Alaska on September 9, 1972 to Angelin Lockhart & Robert Schnabel Sr. He graduated from Wellington High School in 1991 & from Texas A&M University-Commerce in 2014. Robert spent many years working alongside his beloved grandfather and uncles for the family sawmill business in Indiana. He then returned to Texas and became a middle school science teacher, a position he held for seven years until his death. He was known for his gentleness with his students and his willingness to go above and beyond for them, which included coaching extracurricular activities- drone camps, comic book art classes, & a competition-winning chess club. Robert’s devotion to his family and friends was greater still. He adored his mother, Angie. He was a sweet, wonderful, sometimes mischievous older brother to both his own siblings and his cousins. He was a wise and caring friend, quiet in the thoughtful way, a good listener and giver of advice. And he was funny, dry and self-depreciating. Robert was a man of many talents, hobbies, and interests. He was an artist from early childhood through the rest of his life. He loved sci-fi, fantasy, and comic books, and sharing those stories with family. He was competitive in the expert class in flatland BMX as a young adult, and later just continued for fun. He enjoyed weight training and bodybuilding, basketball, Argentine tango classes, shopping for fine colognes, flying drones, and astronomy. He shared a fondness for guns with his brother Court and a fondness for museums with his sister Tara. He played games of many kinds- chess, Dungeons & Dragons, & video games. Robert will be remembered for his kindness, dedication, patience, and mentorship. Robert was preceded in death by his mother, Angelin Charisse Lockhart, and his grandfather, James Carlton Combs. He is survived by his grandmother, Shelby Jean Combs of Corsicana; his stepfather, Tommy Lockhart of Corsicana; his father and stepmother, Robert and Shawna Schnabel of Challis, Idaho; his sisters, Tara Dickson of Corsicana and Amber Klinsky of Boise, Idaho; his brothers, Court Dickson of Amarillo and Anthony Schnabel of McKinney; his niece and nephews, Juliette Dickson, Elijah Dickson, & Ridgely Dickson of Amarillo, & Jordan Torres of Houston; his four uncles, Jim Combs of Haines, Alaska, Sam Combs of Corsicana, Tim Combs of Fox, Alaska, & Phillip Combs of Saratoga Springs, Utah; his six cousins & their families; his three stepbrothers & their families. Visitation will be on Thursday, August 19, from 6 to 9 pm at Griffin-Roughton Funeral Home in Corsicana. A funeral service will be held at 10 am on Saturday, August 21, at Robertson Funeral Directors in Clarendon, with burial following at Llano Cemetery in Amarillo. In lieu of flowers, donations may be made to the Wounded Warrior Project.

The family of Robert Schnabel created this Life Tributes page to make it easy to share your memories.

Send flowers to the Schnabel family.