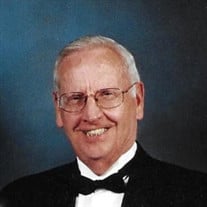 Richard Lawrence Way (January 11, 1934 - April 17, 2020) Richard proudly served in the United States Army, and parlayed those life skills into a successful business career in the private sector. After being honorably discharged in 1963, Richard held executive positions at General Electric, Lockheed Martin, Rockwell International, and Parke-Davis Pharmaceutical. In 1976, Richard earned a partnership position with a law firm in Detroit, Michigan, but ultimately, he fulfilled his dream of branching out and founding his own private law practice. Richard was born on January 11, 1934, to Katherine and George Way in Greenfield, Massachusetts. After graduating from Greenfield High School in 1951, he moved on to the University of Pennsylvania Wharton School of Commerce and Finance. After graduating from, what is now known as, the Wharton School of Business in 1956, and proudly serving his country, he received an MBA from Georgia State University in 1964, followed by graduating from Emory University in 1969 with his Doctorate of Law. Richard and Wilma had a passion for travel and set out to see the world. He would love to sit and share the details of a few of his favorite trips: a cruise around South America, a fun-filled wildlife safari in Africa, or the tour of India, Nepal and the Himalayas. Richard is survived by his wife of 63 years, Wilma Way of Corsicana; his children, Kevin Way of Pickerington, OH and Deborah Bonner and husband Aric of Corsicana, TX.; his grandchildren, Jessica Way of Waxahachie, TX, Austin Way of Madison, WI, Alexis Way, of Indianapolis, IN, and Gabriela Bonner of Corsicana, TX; and one Great-granddaughter Addilyn Bonner. Due to the Covid Pandemic there will be a family graveside service at Oakwood Cemetery on Friday, April 24, 2020 at 1:00pm with Pastor Rick Lamb officiating. Memorials can be made to the Navarro County Humane Society.

The family of Richard Way created this Life Tributes page to make it easy to share your memories.

Send flowers to the Way family.