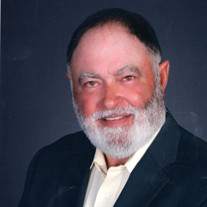 Richard Prather Medford passed away on Tuesday, May 12, 2020, in Fairfield, Texas. Rick was born November 8, 1947 in Madisonville, Texas, to Isom Eugene “Gene” Medford and Mattie Bea Prather Medford. He spent his early years living at the family farm in Leon County, where he developed his love of family and the outdoors. He graduated Huntsville High School in 1966 and continued on to Texas A&M University, where he was a member of the Corps of Cadets, earning a degree in Mechanical Engineering in 1970. His love of A&M, through the friends he developed during his college years and the Aggies he met on his life journey, continued throughout his life. He served active duty and in the reserves as a paratrooper in the Texas National Guard. After graduating from A&M, he began his career with Brown & Root working at Big Brown power plant in Fairfield, when one day while eating at Sam’s Restaurant, he met Julie Ann Childs. As Julie Ann always said, “Rick didn’t know if it was indigestion or love, but his heart burned for three days” after meeting her. They were married in Fairfield, Texas, on July 7, 1973. Rick enjoyed a successful career as a Certified Engineer with Brown & Root, Inc. in Houston, where he retired, and in Glen Rose at Comanche Peak, where was head of construction over the nuclear program. He later worked with Zachary as a consultant. He spent his retirement working cattle on the family farm. A life-long learner, he attended South Texas College of Law, had his appraisal license and his real estate license, and was always reading a new history book. After living in Houston for 16 years and Granbury, he made Fairfield his home, where he loved spending time with his coffee group, running errands to Capps, and visiting and traveling with his family. His life took him on many adventures, including being hijacked to Cuba in the 1980s on a business trip. He was an active member of First United Methodist Church in Fairfield, where he served as a long-time Sunday School Teacher for the high school class and later for the Angie Mae Bonner class. He also served on the church building committee. Always up for the commitments Julie Ann made for them, he loved being Santa Claus with Julie Ann by his side as Mrs. Claus every December for the Old Bowling Community. Rick was a devoted husband, a loving father, a fun Paw-Paw, a life-long Aggie, a faithful Christian, and a loyal friend. He will be missed by many. He is preceded in death by his parents, Gene Medford and Mattie Bea Medford. He is survived by his wife of 46 years, Julie Ann; one daughter, Kathleen Medford Burrell and husband Eric; one son, Tom; his two granddaughters, Harper Ann and Elizabeth Prather Burrell, and a treasure trove of cousins, friends and colleagues. Visitation will be on Saturday, May 16, 2020, from 1:00 p.m. to 7:00 p.m. at Griffin-Roughton Funeral Home in Fairfield. Graveside services will be held at Fairfield Cemetery on Sunday, May 17, 2020, at 1:00 p.m. Pallbearers are his Aggie friends: Dennis Gloyna, Dr. David Lovett, Erwin Zoch, John Martin, Martin Svatek, Burt Richards Fred Galley, Mark Phillips and Randy Maness. A memorial service will be held later this summer at First United Methodist Church in Fairfield. The family asks for memorials to be made to First United Methodist Church or to the Old Bowling Cemetery Building Fund.

The family of Richard Prather Medford created this Life Tributes page to make it easy to share your memories.

Send flowers to the Medford family.