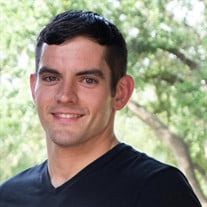 Philip Heflin Moore was born on March 25, 1991, to Darla Heflin Moore and Elton Moore in Palestine, Texas. He made his profession of faith at the age of eleven in 2002 at church camp in Gary, Texas. Philip participated in football and band throughout his junior high and high school years. He graduated from Fairfield ISD in 2009 with thirteen years of perfect attendance. He attended Jacksonville Baptist College and McClellan Community College. He was a certified fire protection technician and a medical emergency technician. He served in the United States Marines from 2013-2017 and completed a nine month tour of duty on the USS Iwo Jima in the Mediterranean Sea, the Red Sea, the Indian Ocean and the Persian Gulf during the Isis Crises. He was discharged as a corporal. He was currently employed as a Administrative Training Assistant at the Waco Center of Youth. Philip was a student of his favorite book, the Bible, which he read every day. His favorite Bible verse is Isaiah 12:2, "Behold, God is my salvation; I will trust, and not be afraid; for the Lord, even the Lord, is my strength and my song: he also is become my salvation." He had a generous heart, giving to three individuals as an organ donor. Philip married the love of his life, Ainsley Rae Richardson, on September 23, 2017. He is preceded in death by his grandfathers, Rev. Roy Lee Moore and Rev. Robert Duane Heflin. Philip is survived by his wife Ainsley of Waco, his parents Darla and Elton of Fairfield, his grandmothers Barbara Moore Storey and Frances Heflin of Fairfield, his parents in law, Misty and Danny Richardson Jr., and Jackie Richardson and his grandparents in law Jane and Danny Richardson Sr. all of Streetman. He is also survived by sisters in law Josey Richardson of Streetman and Hannah Pratt and brother in law Eli Pratt of Fairfield, and Belle Johnson and Tracey Johnson. He is also survived by aunts and uncles: Linda and Jimmy Lott of Collinsville, Marshall and Debbie Heflin of Marshall, David and Jenifer Heflin of Jacksonville, Charlotte Hudler of Longville, Louisiana and Rev. Robert and Gena Easterling of Nacogdoches and god son Clay Puckett of Fairfield, and cousins and nieces. Visitation will be 6:00 pm - 8:00 pm Tuesday, May 25, 2021 at Calvary Baptist Church. Funeral service will be 10:00 am Wednesday, May 26, 2021 at Calvary Baptist Church with Rev. Terry Skinner, Rev. Bruce Worley and Rev. Robert Easterling officiating. Burial will follow at Lake Chapel cemetery. Pallbearers will be Ben Black, Jeff Fryer, Chris Hudler, Dwight Hudler, Samuel Mullen, Andrew Myers, Eli Pratt, and Collin Puckett. Honorary pallbearers are Calvary Baptist Church deacons: Gary Stephenson, Clois Mullen, Curtis Red, Larry Davis, Tommy Miller, Don McLeod, Jerry Sheppard, Mark Chavers, Wesley Keeney, Dennis Lane, Daniel Phillips, Michael Wren, Joe Wren, Marvin Mullen, and George Patterson. Other honorary pallbearers are members of The Soldiers for Christ Sunday School Class: Clint Seale, Lindale Phillips, Clayton Winkler, Boyd Jackson, Billy Patterson, Johnnie Green, Jack Withers, Charles Easterwood, and Keith Whitaker. In lieu of flowers, the family ask for donations at Incommons Bank for Phillip.

Philip Heflin Moore was born on March 25, 1991, to Darla Heflin Moore and Elton Moore in Palestine, Texas. He made his profession of faith at the age of eleven in 2002 at church camp in Gary, Texas. Philip participated in football and band throughout... View Obituary & Service Information

The family of Philip Heflin Moore created this Life Tributes page to make it easy to share your memories.