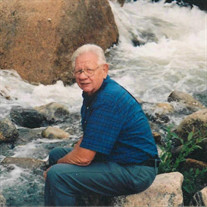 Pete Talley, 83, of Blooming Grove, Texas, was called to Heaven on Wednesday, February 10, 2021. Pete was born September 1, 1937 to Josie (Riola) and LaVelle (Red) Talley in Temple, Texas. He attended St. Mary’s Catholic School for elementary and middle school; and was a 1955 graduate of Temple High School. He married his wife, Renee, 60 years ago, on April 8, 1961, at St. Mary’s Catholic Church in Temple. Following high school, where he spent many hours working in the construction industry with his father, Pete moved to Houston to attend refrigeration school and work in the refrigeration repair industry. Returning to Temple in 1960, Pete enlisted in the 49th Armored Division of the Army National Guard and was called to active duty in 1961 during the Berlin Crisis. He was honorably discharged in 1963. After the army, Pete continued his career in major appliance repair for Sears in Temple until he received an offer for the Service Manager position at WT Grant’s in Houston. In 1968, WT Grant transferred him to their New Jersey office, and the family moved to Long Island, NY. However, after less than a year in the land of the Yankees, these Texans had had enough. Pete resigned his position, and the family prepared to move back home to Texas. As Pete’s reputation preceded him, he was offered and accepted the Regional Service Manager position with Panasonic in Houston. In 1971, he was transferred to Panasonic’s Dallas Service Center, and the family moved to Grand Prairie. In 1976 after several years of business travel, Pete decided to take the position of District Service Manager for Panasonic in Dallas so that he could be home to spend more time with his children who were growing up too fast. This position gave him the opportunity and responsibility of overseeing the construction of the company’s state-of-the-art, repair facility in the late 1970’s, in the newly developing Las Colinas business park. Pete retired from Panasonic in 1994 after 25 years of service. Although he retired from Panasonic, he did not retire. He spent 5 years working for the Regional Board of Realtors managing the installation and operation of their Multiple Listing Service software program. In 1999, Pete resigned from the Board to begin what was initially going to be retirement as he and Renee moved to their new country home in Cayuga, Texas. Not one to be idle for long, Cayuga ISD soon had a first-rate “Mr. Fix-It All” for their Maintenance Supervisor. He enjoyed the work he was doing in the schools and interacting with the staff and students. Pete and Renee spent many Friday nights at football games as well as afternoons or weekends at volleyball and basketball games. Pete once again retired (umm, not really) from Cayuga ISD in 2008; however, he continued to work part-time training other staff or filling in when needed until 2017 when he and Renee moved to Blooming Grove, Texas to be closer to their children. Pete and Renee spent many summer vacations with their children traveling to and camping in many different destinations in the US especially those with historical significance. After the children were grown, they continued to enjoy traveling to many places in the continental US, Hawaii, Alaska, the Holy Land, and Rome. They also enjoyed going to antique stores, flea markets, craft shows, and quilt shows. Pete often enjoyed creating various woodworking projects in his workshop. His greatest joy was spending time with his grandchildren, watching their activities, and watching them grow into adults with children of their own. Pete was baptized, attended school, was an altar server, and was confirmed at St. Mary’s Catholic Church in Temple. Pete married Renee at St. Mary’s and their two oldest children were baptized at St. Mary’s. After moving to Grand Prairie, the family were active parishioners of Immaculate Conception Catholic Church and later, St. Michael the Archangel Catholic Church. After moving to Cayuga, they were active parishioners of Mary, Queen of Heaven in Malakoff, St. Edwards Catholic Church in Athens, then finding a church home at Sacred Heart Catholic Church in Palestine. After moving to Blooming Grove, they searched for a new home where they were comfortable, and finally joined Nativity of the Blessed Virgin Mary Catholic Church in Penelope. It seemed like there was not anything the World’s Best Mr. Fix-It could not fix until kidney failure and cancer came calling. Carrie, his daughter who preceded him, must have told God about her Dad’s crazy good skills, and God decided he needed those skills in Heaven. Along with Carrie, he will be joining his father, Red Talley, his mother, Josie Riola Talley, his mother-in-law, Ruby Robbins Hicks Ross, and many other extended family members. Although he is no longer here, he did not leave Renee without making sure he had her fix-it needs covered. She blessed him with two sons; Brad Talley of Blooming Grove and Thomas Talley (Audra) of Grandview who he taught well to be Mr. Fix-Its in their own right; and his eldest daughter, Lisa Witten of Waxahachie, she is not as good at fixing things as her brothers, but he taught her enough to be able to hold her own. He leaves a legacy of “why replace it if you can fix it” to 13 grandchildren, and 13 great-grandchildren. He will be missed by numerous extended family members, friends, and colleagues who have enjoyed his company, kindness, wisdom, and yes, his fix-it help. A Celebration of Life Mass will be held on April 10, 2021. 10:00am, at St. Mary’s Catholic Church, Temple, Texas, followed by interment at Moody Cemetery in Moody, Texas at 12:15 pm, Father Kurtis Wiedenfeld, officiating.

The family of Pete Talley created this Life Tributes page to make it easy to share your memories.

Pete Talley, 83, of Blooming Grove, Texas, was called to Heaven...

Send flowers to the Talley family.