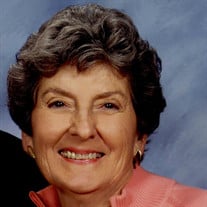 Margaret Ann (Peggy) Campbell was born February 1, 1931, in Houston, TX to parents Lloyd Allen Hammer and Alma Statz Hammer. She passed into eternal grace on February 12, 2022, in Corsicana, TX at the age of 91. Peggy attended Holy Rosary Catholic School, Lanier Junior High, and graduated Lamar High in Houston in 1949. Subsequently she studied fashion and design in the homemaking department of the University of Texas at which time she was also a member of Zeta Tau Alpha sorority. In the summer of 1951, she transferred to the University of Houston to continue her major, this being a move that had lasting implications for in the closing months of that summer she had a blind date with medical student David Campbell, beginning what would be a lifelong union of love and devotion that lasted through courtship and their marriage in 1953. On last June 12 they celebrated 68 years together. Following their marriage, they remained in Houston for an additional two years followed by a tour of duty in the United States Air Force as a military wife while then Capt. Campbell served as Flight Surgeon in the training command at Laredo AFB, TX. Upon separation from active duty, they moved to Corsicana in July of 1957 and immersed themselves into this community which she loved and served throughout her remaining years. Peggy’s values were love of God, family and fellow man. She was happy to have been a faithful member of Immaculate Conception Catholic Church since her arrival and chose to serve quietly in most instances which was her nature. She had been a member of the Altar Society since her arrival, and while she was able to do so she led the recitation of the Rosary prior to Mass for many years and is so doing she was quietly influencing other Masses to adopt this practice. She was an active mother in meeting the needs of the Collins Catholic School during the years her three children were students. Though inactive in her waning years she was very proud to have been a forty-three-year member of the Daughters of the American Revolution. A lifelong love for the beach, the sand and the surf led her to become an excellent swimmer. She held both YMCA and Red Cross upper level and advanced certifications in multiple aquatic skills and lovingly offered these talents via the Corsicana YMCA aquatics programs which she faithfully served as a volunteer for 38 years, making scores of friends along the way. Additionally, she offered this skill set as the aquatic instructor for Navarro College for a time span of 11 years. Peggy’s service at the “Y” went beyond the pool as attested by her election as the first woman to serve on the Board of Directors and subsequently to be elected the first woman President to serve the Corsicana YMCA, this occurring in the centennial year of our “Y” in 1980. She was honored to serve on the National YMCA Southwest Field Committee thus representing a large segment of this country in national deliberations. She was honored to be the third recipient of the coveted YMCA C.V. (Pete) Breithaupt Jr. Distinguished Service Award in 1980 and her community at large recognized her with the Community Service Award in 1999 for “Service Above Self”. Peggy’s love of water took a new dimension when she struck a bargain with Dr. Dave who had been encouraging her to take flight lessons; she would do so if they together could take scuba lessons. A good strategy that worked. She became a licensed pilot and the best co-pilot ever while the two explored the underwater world. Also, in closing these remarks, to see a fuller picture of this lovely and always smiling lady we should make note that she had striking artistic talents which embraced not only those of her training with fabrics and sewing skills, but she was also able to see and create beauty with pen and brush. She was preceded in death by her parents Alma and Lloyd Hammer, her adoring brother, Lloyd Allen “Buddy” Hammer Jr. and his wife, Charlotte, and her beloved son Charles “Chuck” Campbell. She is survived by her devoted husband Dr. David Campbell, children Charlotte (Chari) Campbell Hust and husband Dr. Robert, Carolyn Campbell Pass Abbott and husband Greg, and daughter in law Hollye Hammond Campbell. Her grandchildren include Fr. David Hust, Dr. Michael Hust and wife Molly, Kristin Pass and Kendall Pass. Great grandchildren include Campbell Marie Hust and Margaret Hust. She is also survived by a number of beloved nieces and nephews and extended family. Memorial donations may be made to the Corsicana YMCA, James Collins Catholic School Scholarship Fund, St. Jude Hospital, Memphis, TN or an organization of your choosing Visitation will be Wednesday, February 16th from 6-8pm at Griffin-Roughton Funeral Home. Rosary will be at 6:00pm Wednesday, February 16, 2022 at Griffin-Roughton Funeral Home. Mass of Christian Burial will be 10:00am Thursday at Immaculate Conception Catholic Church. Burial will be at Oakwood Cemetery. Pallbearers will be Dr. Dale Campbell, Dr. Mike Dunavent, Capt. Joe Hill, Jerry Wayne Johnson, Terry Seth and Bill Worthen. Honorary Pallbearers will be B.J. Coker, Tom Hammer, Barbara LePoris, Dr. Lester McGary and Dr. Lee Phillips Link for live stream funeral service: https://youtu.be/AM3dLvhfMyc

The family of Peggy Campbell created this Life Tributes page to make it easy to share your memories.

Send flowers to the Campbell family.