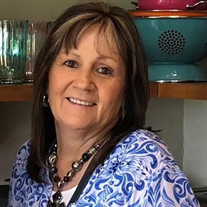 Patricia “Patti” Ann Neiman, 59, of Corsicana, Texas, passed away on January 1, 2021 after a brief hospital stay. She was born September 2, 1961, in Dallas, Texas, to Barbara and Jesse Jackson. She was preceded in death by her mother Barbara Reid her father Jesse Jackson, step-mother Carolyn Jackson, and sister Connie Jasper. She is survived by her fiancé, Randy Roper, children Terry Moore, Jr. (Rhonda) of Ft. Smith, AR, Chris Neiman of Corsicana, TX, Heather Brunton, of Barry, TX, Jennifer Page (James) of Blooming Grove, TX, Cory Roper (Bretleigh) of Dallas, TX. Also surviving are siblings, Cody Jackson (Mia) of Emory, TX, Angie Parmer (Heath) of Emory, TX and Jackie Bevis of Farmersville, TX, 17 grandchildren and several nieces and nephews. Patti was a long-time resident of Corsicana, Texas. She had an in-home daycare for over 20 years. She enjoyed cooking, crafting, gardening, visiting garage sales, and was an amazing seamstress. The thing she enjoyed the most was spending time with her family and grandkids. During the high school years of her son, she created the home where everybody wanted to be. She developed a surrogate mother relationship with many of the high school kids who remained “her kids” to this day. She enjoyed keeping up with them, as many of them had started to create families of their own and they still referred to her as “Miss Patti”! The visitation will be held at Griffin Roughton Funeral Home on Tuesday, January 5, 2021. It will be open from 12:00 pm to 7:00 pm. The family will receive visitors from 5:00 pm to 7:00 pm. The celebration of her life will be held at 1:00 pm on Wednesday, January 6, 2021 at Griffin Roughton Funeral Home Chapel with Bro. Floyd Petersen officiating. Pallbearers will be David Richter, Tim Morris, Eric Maler, Keldon Parmer, Jon Bauer, Walt Harper. Honorary pallbearers will be Ross Reamy, Andrew Bonner, Jonah Coley, Kyle Murphy, Adam Brown, AJ Shaw. Burial will follow at Eureka Cemetery. Link to service livestream: http://webcast.funeralvue.com/events/login/44585

The family of Patricia Neiman created this Life Tributes page to make it easy to share your memories.

Send flowers to the Neiman family.