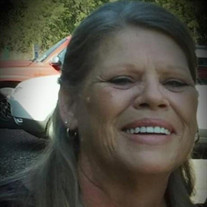 Patricia Ann Latham, age 65, of Kirvin, Texas passed away Friday, October 30, 2020in Fairfield, Texas. Patricia was born on March 16, 1955 in Fort Worth, Texas to Richard Sr. and Freda Tobin and later adopted by Eugene and Dorothy Tucker of Corsicana. Patricia graduated from Corsicana High School and went onto obtain her cosmetology license. Shortly after, she met a man in a black felt cowboy hat at the skating rink in Corsicana, Patricia knew then he was her forever. As most soulmates do, Bobby and Patricia wed soon after on November 3, 1973. Patricia and Bobby made their home in Corsicana until Bobby started his career in the U.S. Army. Patricia decided to stay home and raise their 3 daughters. Over the years Patricia touched many lives and made many friends in Louisiana , Hawaii and Washington including those from her most recent time spent with Fluor working in the toolroom in which she enjoyed very much. Patricia loved Bobby dearly and stood strong by his side throughout all of lives battles that were thrown at them. Most of all, Patricia loved her girls and especially all her grandchildren and great grandchildren. She was always quick to lend her heart and hand to help anytime she could, even when given a last minutes notice for them grandbabies. Those left to cherish her memory are her husband of 47 years, Bobby Joe Latham of Kirvin; daughter, Dena (Lu Lu) Swope and husband Andy, grandchildren, Nicholas, Bobby and Ember, all of Kirvin. Daughter Susan Bradley of Fairfield; grandchildren, Brian Bradley and wife Erin of Mascoutah, Illinois with great grandchildren, David, Ethan, and Emma. Also, Tambra Bradley Perez and husband Chris of Wortham with grandchildren Skylar, Peyton and Greyson. Daughter Mary Valle of Kirvin with grandchildren Madison, Jesseca and Kolby. Also left to cherish Patricia's memory are her siblings: Richard Tobin Jr. of Azle, Donna Huston and husband Stan of Joshua, Jeff Wright of Joshua, Ronnie Tobin of Huntsville, Angela Walters of Joshua, Don Walker and wife Sally of Yoakum, Marie Sladek and husband Blake of Stratford, Maellen Isenberg and husband Marcus of San Antonio along with many nieces, nephews, brothers and sisters-in laws. Patricia was preceded in death by her parents Richard Sr and Freda Tobin, Eugene and Dorothy Tucker. Also her sister Pamela Nelson and husband Ernie Sr, sister Jan Prowell and son-in-law David Wayne Bradley.

Patricia Ann Latham, age 65, of Kirvin, Texas passed away Friday, October 30, 2020in Fairfield, Texas. Patricia was born on March 16, 1955 in Fort Worth, Texas to Richard Sr. and Freda Tobin and later adopted by Eugene and Dorothy Tucker of... View Obituary & Service Information

The family of Patricia Latham created this Life Tributes page to make it easy to share your memories.

Send flowers to the Latham family.