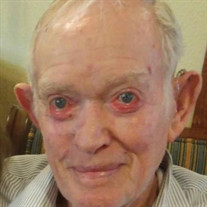 Melvin Gene Wardlaw, 91, of Corsicana, Texas, passed away peacefully January 6, 2021. He was born September 22, 1929 to Gladys and Elmer Wardlaw in Mertens, Texas. On January 23, 1954, he married Shirley Annette Cain and they resided in DeSoto, Texas for over 50 years before moving to Corsicana. Gene served his country stateside in the Army during the Korean War. After he returned home, he met Shirley at a café in Dallas where she often served him breakfast. She told her friend prior to meeting him that she would marry him one day. Before he knew what hit him, he was married. Her instincts must have been right as they were together 63 years before she passed away in 2017. Gene had many talents as a young man, but the majority of his life was spent hauling milk in an 18-wheeler for Foremost and Schepps Dairies. He worked long hours to ensure his family was secure. It must have been fulfilling as he recently said, “If I could only drive a truck one more time.” Anyone who knew him would describe him as a kind, patient, humble and content man. These words describe the boy his siblings remembered, the man Shirley fell in love with and the father that raised two very appreciative daughters. He needed little from life other than making others smile – especially his family. He was known for random acts of kindness like mowing neighbors’ lawns. Whether DeSoto or Corsicana, that simple act of kindness brought neighborhoods together. He impacted many people in his lifetime, but no one more than his family of which he was so very proud. He is survived by his daughter, Debbie Wylie and husband, Mike; his daughter, Kim Brown and husband, Phil; his granddaughter, Lindsay Olsen and husband, Greg; his granddaughter, Erin Freytag and husband, Kolby; his granddaughter, Emily Wagner and husband, Sam; 5 great-grandchildren, Grant Ecord, Cooper Olsen, Annie Olsen, Emery Freytag and Lincoln Freytag, sister-in-law, Lucille Wardlaw; and many nieces and nephews. He is preceded in death by his wife, Shirley Wardlaw; brother, Joe Wardlaw; sister Janice Kidd, and half-brother, Raymond Staats. Family will gather for a graveside service at the Richland Cemetery in Mertens, Texas on Friday, January 15 at 2:00 pm. In lieu of flowers, memorials may be made to Westhill Church of Christ Benevolence Fund, 3400 SH 22 Corsicana, Texas 75110.

Melvin Gene Wardlaw, 91, of Corsicana, Texas, passed away peacefully January 6, 2021. He was born September 22, 1929 to Gladys and Elmer Wardlaw in Mertens, Texas. On January 23, 1954, he married Shirley Annette Cain and they resided in DeSoto,... View Obituary & Service Information

The family of Melvin Gene Wardlaw created this Life Tributes page to make it easy to share your memories.

Send flowers to the Wardlaw family.