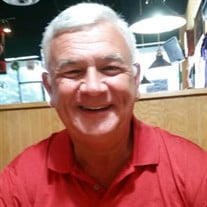 Melba Lois Bower, Jr., better known as Butch, 63, passed away at Baylor Scott & White in Waxahachie, Texas on Monday, January 18, 2021. He had battled the Covid-19 virus with courage, dignity, and grace before being called home by God. Butch was born on July 16, 1957 to Melba Bower, Sr. and Mary Eleanor (Green) Bower in Corsicana and was a lifelong member of the Corsicana community. Butch graduated from Corsicana High School in 1975 and later attended Navarro College and Lubbock Christian College which is now Lubbock Christian University. He married Terry Bower in 1982 and they just reached their 39th Wedding Anniversary January 16, 2021. Butch was a man of impeccable integrity and character. He dedicated his life to his family and work. He worked at least two jobs for the majority of his life. Those jobs included being an administrator at New Encounters Residential Treatment Center in Mildred, Texas and as a teaching assistant at Mildred Independent School District. He loved helping others and was a mentor to countless young men at New Encounters. Butch never met a stranger and was always there to talk to you if you had a problem or was just needing someone to listen. He loved sports and his favorite past times included watching the Dallas Cowboys, Texas Rangers, Dallas Mavericks, cheering on the Texas Tech Red Raiders, and supporting the Mildred High School and Corsicana High School athletic programs. Butch was a steadfast family man and was the best father and husband anyone could have hoped for. His passing was unexpected and heartbreaking to all that knew him. There will never be another Butch Bower and he will be deeply missed. Butch is survived by his wife Terry (Willingham) Bower; father Melba Bower Sr.; mother Mary Eleanor Bower; sister Rexanne Thomas and husband Wade Thomas of Van, Texas; daughters Kristy Johnson and husband Chris Johnson of Farmers Branch, Texas; Cheryl Jennings and husband John Jennings of Rockport, Texas; Shelley Hill of Lubbock, Texas; son Gary Bower and wife Rebecca Esquivel of Lubbock, Texas; grandchildren Ethan, Elise, Elijah Medina of Farmers Branch, Texas; John-Eric and Catherine Jennings of Rockport, Texas; Jacey and Luke Hill of Lubbock, Texas; father-in-law Billy G. Willingham; mother-in-law Genell Willingham; brothers-in-law Tim Willingham of Colorado; Tony Willingham and wife Gay Willingham of Frisco, Texas; nephew Josh Willingham and wife Courtney Willingham of Carrollton, Texas; and niece Jordan Welch and husband Max Welch of Frisco, Texas. Visitation will be held at Griffin-Roughton Funeral Home in Corsicana, Texas Friday, January 22nd from 6-8 pm and funeral services will be held at Griffin-Roughton Funeral Home Saturday, January 23rd at 11am. Burial will be at Oakwood Cemetery. In lieu of flowers, the family requests donations be made to Mildred Independent School District where a memorial will be set up in honor of Butch. Link to livestream of service: http://webcast.funeralvue.com/events/viewer/46231

Melba Lois Bower, Jr., better known as Butch, 63, passed away at Baylor Scott & White in Waxahachie, Texas on Monday, January 18, 2021. He had battled the Covid-19 virus with courage, dignity, and grace before being called home by God. Butch... View Obituary & Service Information

The family of Melba "Butch" Bower created this Life Tributes page to make it easy to share your memories.

Send flowers to the Bower family.