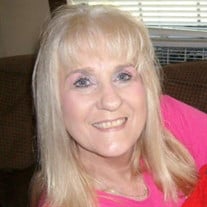 Mary Elizabeth Sharp, age 65 passed away peacefully Tuesday January 19, 2021, after fighting a lengthy battle with Covid Pneumonia, in Corsicana Texas. She was born September 10, 1955 in Dallas, Texas to Will V. Sr. and Mary Ruth Sharp. Mary was a devoted daughter, sister, mother and most importantly a “GiGi” to 10 grandkids whom she adored beyond belief. Mary graduated from Ferris High School and later resided in Red Oak during her child-bearing years. She lived on Carroll Lane and often referred to her neighborhood wives, who were very close friends as “The Gang”. Once her kids began school, she relocated to Italy, Texas and opened a cafe where she made many delicious dishes, but was known far and wide for her pies. She told many, entertaining stories of running the cafe where she was an amazing cook. Her kids would even come before heading to school in the morning to help her prep for the day. Fridays were always a highlight for the football players when they had the pleasure of being served Momma Mary’s home cooked meals before Friday night light’s festivities. After later closing the cafe, Mary enjoyed sewing when she found time and went back to school to finish her degree in bookkeeping/clerical work. Mary spent the last 20+ years as the office manager, working alongside her middle son, Josh at JK Excavation. She was the office bookkeeper but most importantly, the counselor and momma to many. Every single person that called and/or walked into the office always asked to speak with “Momma Mary”. As busy as she was, she always made time to make each person feel important and valued. She treated her co-workers like family and the feeling was certainly mutual. When Mary wasn’t working she could be found at one of the grandkids sporting events, award ceremonies, or cow shows. She was easy to spot because she was always the one in the front row- cheering the loudest and blowing her air horn. Gigi didn’t just cheer for her grandkids but for the whole team and their friends that became family to her as well. No grandkids or friends of her grandkids got away without a hug and “GiGi loves you!” She was always the first to call her grandbabies on their birthday to wish them a happy birthday. As much as she loved her kids, her grandkids were her everything!!!! Mary is survived by mother Mary Ruth Sharp, brothers Clint Sharp & his wife Robertta, Tony Sharp & his wife Tonya, as well as her children Richard Lancing Trees Jr, Josh Trees & his wife Karen, daughter Brittani Bryant & her husband Chase, and finally her precious grandkids Blake Trees & his wife Brianna, Bryan Corley, Brooklyn Corley, Ricky Castillio, Jaydin Bryant, Zachery Bryant, David Bryant, Rushton Trees & Elizabeth Trees. Mary was preceded in death by her father Will V. Sharp Sr., brother Will V. Sharp Jr. and granddaughter McKenzie Trees . Public visitation will be held Wednesday January 27, 2021 from 12:00-1:00 pm with a private service for family following at 2:00 pm at Griffin-Roughton Funeral home, officiated by Pastor Joseph Barrett. In lieu of flowers the family is asking for monetary donations to benefit Mary’s late granddaughter’s children: McKenzie Trees Kids Trust Account @ First State Bank of Italy, TX.

The family of Mary Sharp created this Life Tributes page to make it easy to share your memories.

Send flowers to the Sharp family.