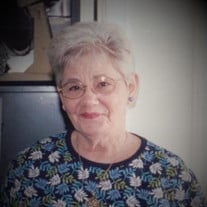 Mary Imogene Dawson Ferguson, passed away February 8, 2021. She was born June 16, 1937 in Freestone County. She married Billy Bert Ferguson on December 24, 1952. She lived in the Freestone area her whole life of 83 years. She was a member of... View Obituary & Service Information

The family of Mary Imogene Ferguson created this Life Tributes page to make it easy to share your memories.

Send flowers to the Ferguson family.