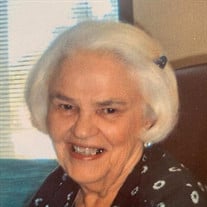 Mary Nell Wray Biggers’ blessing to this world began on June 8, 1928 and ended peacefully on June 6, 2020. She was born and raised on a farm in rural Mississippi near the small town of Kilmichael. Mary married Glen Biggers on August 2nd, 1947, and together they raised two sons and a daughter. After they made their way to Texas, she decided to take on the duties for the United States Postal Service. She became Postmaster in Streetman, Trinidad and finished out her career as Postmaster in Powell, Texas. After 28 years of dedicated service, Mary retired in 2003. Retirement from the Postal Service did not signify retirement from service to her fellow citizens. Mary was a volunteer at Navarro Regional Hospital. She loved gardening, quilting, sewing and enjoyed spending time with friends and family. She was especially fond of taking care and spreading wisdom to her grand children, and great grandchildren. She answered to “Mimi” “Meems” and “Tot” a great deal more than her given name of Mary. Mary was a devoted Christian with a beautiful set of values and was an active member of St. John’s Episcopal Church. One of her favorite verses was Romans 8: 38-39 “For I am convinced that neither death nor life, neither angels nor demons, neither the present or the future, nor any powers, neither height or depth, nor anything else in all creation, will be able to separate us from the love of God that is in Jesus Christ our Lord.” Mary or “Mimi” was a walking, talking personification of spreading God’s love, and the privilege of being in her presence allowed one to realize the value of simply looking on the bright side. Mary is preceded in death by her parents Mary Eiland Wray and James Monroe Wray, brothers Lamar Wray and Wayne Wray, husband Robert Glen Biggers and son Brian Duke Biggers. She is survived by son Robert Glen Biggers Jr., daughter Susan Smith and husband Jeff, grandchildren Glen Smith and wife Lindsay, Gayle Williams and husband Chuck, Brooke Sanchez and husband James, great grandchildren: Avery, Finley and Drew Williams, Brian and Kendall Sanchez and sister, Christine Garrett. Mary is also survived by many friends and extended family. Visitation for Mary Biggers will be: Tuesday, June 9, 2020 from 6pm-8pm Graveside services will be conducted by Father Ed Monk Wednesday, June 10, 2020 at 9:30am at Oakwood Cemetery. Memorials can be made to the American Heart Association, American Cancer Society or the charity of choice.

Mary Nell Wray Biggers&#8217; blessing to this world began on June 8, 1928 and ended peacefully on June 6, 2020. She was born and raised on a farm in rural Mississippi near the small town of Kilmichael. Mary married Glen Biggers on August 2nd,... View Obituary & Service Information

The family of Mary Biggers created this Life Tributes page to make it easy to share your memories.

Send flowers to the Biggers family.