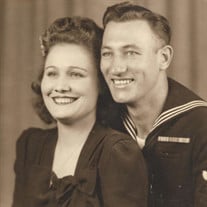 Mary Eddie Baker, 96, passed away Thursday, December 17, 2020 in Corsicana. She was born April 21, 1924 in Wise County to George and Cloria Minhinnette. She married the love of her life Robert Thurman Baker on April 2, 1945. Mary was a devoted homemaker to her family. Her children, grandchildren and family were her love. She enjoyed cooking for her family which were three meals a day, everyday. Gardening, canning and playing games with the grandchildren was a few of her favorite things to do. Whatever her grandchildren wanted to do she did, she even let them win when playing games. Over the years she babysat many other children, raising them and claiming them as hers also. She and Robert attended First Assembly of God many years ago in 15th St. and later Calvary Worship, where they helped build the church. Mary is preceded in death by her husband, Robert Thurman Baker and daughter Patricia Ellen Southard. She leaves behind to cherish her memory, daughter, Wanda Spain and husband John; son Dale Baker and wife Mary Ann; Son in law, Bill Southard. Grandchildren, Chelsea Covington and husband Jeff, Lacy Johnson and husband James, Jeff Baker, James Baker and wife Ashley, Shelby Thedford and husband Alan, Mary Ann Haden and husband Larry, Heather Southard. Eighteen great grandchildren and three great great grandchildren. Visitation will be 12:00 pm - 1:00 pm Sunday, December 20, 2020 at Griffin-Roughton Funeral Home. Graveside service will be 2:00 pm Sunday at Pattison Cemetery with Charky Marquis officiating. Honorary pallbearers will be Zane Haden, Larry Haden, Jeff Baker, James Baker, James Johnson, Lawson Covington, Jeff Covington, Sloan Thedford, Carter Grant, Alan Thedford and Danny Thomas.

Mary Eddie Baker, 96, passed away Thursday, December 17, 2020 in Corsicana. She was born April 21, 1924 in Wise County to George and Cloria Minhinnette. She married the love of her life Robert Thurman Baker on April 2, 1945. Mary was a devoted... View Obituary & Service Information

The family of Mary Baker created this Life Tributes page to make it easy to share your memories.

Send flowers to the Baker family.