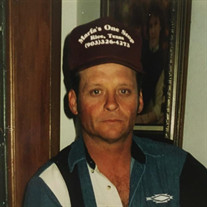 Mark Anthony Bassham, 60, of Corsicana, passed away on March 5, 2021 in Corsicana, Texas. Visitation will be 11am-12pm Thursday, March 11, 2021 at Griffin-Roughton Funeral Home Funeral services will be held at 12pm Thursday, March 11, 2021 at Griffin-Roughton Funeral Home with Bro. Larry Talbert of Westside Baptist Church, officiating. Burial will follow at Mt. Olive Cemetery in Scurry, Texas. Arrangements are by Griffin-Roughton Funeral Home. Mark Anthony Bassham was born April 24, 1960 to GH and Gladys Bassham. He attended school in Corsicana Texas. Mark loved all animals and they loved him. He liked to cook and watch cooking shows on TV. He was an amazing artist and a very kind soul. He was an avid collector of all the little treasures he would find on his job. He was a lover of history and a Civil War enthusiast. When Mark was working under a house and come across a scorpion or snake instead of killing them he would actually relocate them....that describes Mark as a person. Mark is survived by both parents; GH and Gladys Bassham, 2 children; Christi Bassham and Justin Rice (Sheena), Siblings; Sandra Barker (Ronnie), Kathy Robinson (Donny), Janice Chambers (Terry), Randy Bassham (Laura), Grandchildren; Delaney Bassham, Alecia Jockaway, Emalie RIce, and Christien Rice. Pallbearers will be Ronnie Barker, Terry Chambers, Donny Robinson, Taylor Chambers, Scott Horton, Alvin Mullican, and Justin Rice.

The family of Mark Anthony Bassham created this Life Tributes page to make it easy to share your memories.

Mark Anthony Bassham, 60, of Corsicana, passed away on March...

Send flowers to the Bassham family.