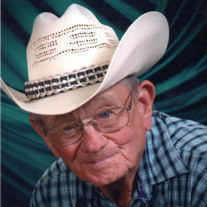 Mahlon “Shorty” Lee Tate, of Powell, Texas passed away on March 27, 2022. He was born on November 16, 1930, in Loop, Texas to his father, Burton William Tate and his mother Linnie Smith. Shorty was a builder and a caregiver. He and Betty made the most out of life and enjoyed each other. He loved children and they loved him. He was a father figure and Grandpa to many. He loved holidays, especially Christmas and gift giving. After retirement he spent his time making gifts for Christmas. These included lamps, bird houses, crosses, wooden toys, and jewelry. He adored his grandkids and loved spending time with them. One of his and Betty’s favorite things to do was go to karaoke and sing with their many friends. If he was invited for a holiday or just a meal, he always brought pumpkin bread. Mahlon “Shorty” Tate was preceded in death by his first wife, Lorena Tate, sons, Jackie McClain, Bobby McCain, Ricky McCain, and Tony McCain. He is survived by his wife and love of his life, Betty Lou Northcott; sister, Peggy Willis and husband Jim; daughters, Beth Faulk and Heather Condley; son, David Conklin; nieces, Debora Flournoy and Terrie Echols; Grandchildren, Caleb McCain, Dustin McCain, Bryan Adams, Brittney Adams, Ethan Baker, Kallie Baker, Khiana Shannon, Brenna Conklin, Kendle Vitters, Ryan Condley, Haley Dunn, Graham Conklin, Daniel Conklin, and Andrew Conklin; cousins, Kent Grimes, John Tate, Roy Tate, Minnie Jean Harrison, Lloyd and Judy Bingham, and several others. He also leaves behind a host of great-grandchildren. Visitation will be Friday, April 1st from 6-8pm at Griffin-Roughton Funeral Home. Graveside Funeral Service will be 10:00am Saturday, April 2nd at Hamilton-Beeman Cemetery with his grandson Caleb McCain officiating. Pallbearers will be Ryan Condley, Daniel Conklin, Andrew Conklin, Graham Conklin, Alan Vitters, Richie Dunn, and Tristian Dunn.

The family of Mahlon Tate created this Life Tributes page to make it easy to share your memories.

Send flowers to the Tate family.