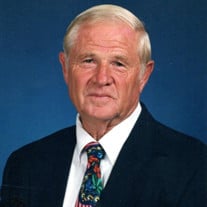 Louis "Doc" Harold Shaver, Sr. passed away on March 19, 2020 in Palestine, Texas. Harold was born on June 2, 1935 in Athens, Texas to Thelma Fowler Shaver and Clifford Andrew Shaver. He was a 1952 graduate of Athens High School and enrolled in Henderson County Junior College, now Trinity Valley Community College where he was a football player for the Cardinals. In 1954 he married Martha Lynn Laney, a high school classmate from Athens. They transferred to East Texas State College, now Texas A&M Commerce, and completed their degrees. Harold received the Bachelor of Science degree with a major in history and a minor in government in 1956, also receiving a Professional life all level teaching certificate. He coached and taught in Forney and Houston before receiving his Master of Education degree in 1958 from E.T.S.U. For the next four years he coached and served as elementary principal in the Wharton I.S.D. In 1962 Harold was employed as superintendent of the Cross Roads I.S.D. In 1968 he accepted a fellowship in the department of school administration at E.T.S.U. He served as research assistant for the East Texas School Study Council for two years while studying for the doctor of philosophy degree. After receiving his Ph. D degree in Educational Administration, he accepted a position in Mt. Pleasant as associate director for Region 8 Education Service Center. In 1974 Harold and his family moved to Fairfield where he became high school principal for five years. He also worked part time for Trinity Valley Community College and Navarro College. He completed his educational career with the Windham Schools in 1990. After retirement Harold continued his work as owner and manager of Plant World Garden Center in Fairfield. It is currently managed by his son. Harold was a member of the Texas State Teachers Association and served as president of the Henderson County Chapter. He holds memberships in Texas Association of School Administrators, Texas Elementary Principals and Supervisors Associations, Zeta Mu Chapter Kappa Delta Pi, Phi Delta Kappa, and was one of the "First Fifty" to receive his Ph. D degree in Education Administration at East Texas State University in 1970. He served for many years in various capacities: Wharton Jr. Chamber of Commerce, Boy Scout leader, Director of Henderson County United Fund, Little League organizer, Fairfield City Council, Fairfield Chamber of Commerce member and director. Harold has been a member of the First Baptist Church in Fairfield since 1974. He also served as Sunday school superintendent at Cross Roads. He was preceded in death by his parents; wife Lynn of 65 years and one sister, Eva Shaver Darden. He leaves his legacy to his daughter, Sharilyn Shaver (Mike) Moore; son Louis Shaver, Jr. (Soraya) and three granddaughters, Melissa Adair, Sarina Shaver, and Lacie Shaver. Also, three step grandchildren, Jacob Hulse, Alicia Peterson and Cody Moore and one great grandson, Brady Adair; one brother Dr. Ted Shaver and wife Judy; and a host of nieces and nephews. Viewing will be 11:00am - 1:00pm Sunday, March 22nd at Griffin-Roughton Funeral Home, Fairfield. Family Graveside Service will be 2:00pm Sunday, March 22, 2020 at Oaklawn Memorial Park in Athens with Bro. Bubba Rutherford officiating. Honorary Pallbearers will be Blake Laney, Don Darden, David Darden, Cody Moore, Timmy Cooper, Jason Richenberger and Jacob Hulse. Honorary Pallbearers in Memorium Don Tolar, Kenneth Born, Turner Oats and Roy Casey. In memory of his wife the family asked that donations may be made to Alzheimer/Dementia Association.

Louis "Doc" Harold Shaver, Sr. passed away on March 19, 2020 in Palestine, Texas. Harold was born on June 2, 1935 in Athens, Texas to Thelma Fowler Shaver and Clifford Andrew Shaver. He was a 1952 graduate of Athens High School and enrolled... View Obituary & Service Information

The family of Louis "Doc" Harold Shaver Sr created this Life Tributes page to make it easy to share your memories.

Send flowers to the Shaver family.