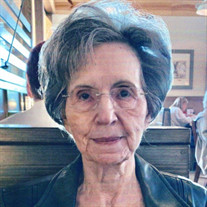 Lorene Brown Sykes, loving wife and mother, 86 of Corsicana passed away on Saturday, September 12, 2020 surrounded by her family. She had recently suffered a major stroke after hip surgery and was currently on hospice care. She was born in Purdon on October 3, 1933. She married James W. Sykes on September 26, 1950. They had one son, James Keith in 1960 and three years later a daughter, Karen Ann. She loved serving the Lord and loved her family very much. She was a proud member of Calvary Worship Center. She gave her heart to Jesus at an early age. She was a wonderful Christian lady and a good cook. She is preceded in death by her husband, James W. Sykes; parents, Gladys and Robert Lee Brown; brother Russell Brown; sisters Laverne Smith, Maggie Brown and Peggy Maudlin. She is survived by her son & daughter-in-law, Keith and Sandra Sykes of Corsicana; daughter and son-in-law, Karen & Charles Fincher of Corsicana; grandson and girlfriend, Drew Sykes and Sarah Klanika of Navarro Mills and one great grandson, Kade Sykes of Navarro Mills which was only 2 weeks old upon her death. She was also survived by her brother, Charles Brown & wife Paula of Dawson; sister Hazel Watson of Mesquite. She was also dearly loved by Sally, Keith & Sandy's maltese & also a large number of nieces, nephews, church family & many friends who will miss her dearly. We would also like to extend a loving thank you to Bristol Hospice for such tender loving care for our mother. Visitation will be Wednesday, September 16th from 2:00pm-4:00pm at Griffin-Roughton Funeral Home. Funeral Service will be 4:00pm Wednesday, September 16th at Griffin-Roughton Funeral Home with Dr. Gary Johnson and Rev. James Williams officiating. Burial will be at Hamilton-Beeman Cemetery. Pallbearers will be Harper Watson, Brett Morris, Cubie Ward, Teddy Fincher, Johnny Wayne Brown and Kevin Raymond

Lorene Brown Sykes, loving wife and mother, 86 of Corsicana passed away on Saturday, September 12, 2020 surrounded by her family. She had recently suffered a major stroke after hip surgery and was currently on hospice care. She was born in Purdon... View Obituary & Service Information

The family of Lorene Sykes created this Life Tributes page to make it easy to share your memories.

Send flowers to the Sykes family.