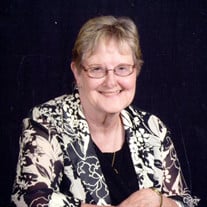 Lois Joy Black, 74, of Mexia, Texas, passed away on May 30, 2021 in Ennis, Texas. Visitation and Rosary will be 6:00 PM Friday the 4th at Griffin-Roughton Funeral Home in Fairfield. A Funeral Mass will be held at 10:00 AM on Saturday, June 5th at Saint Bernard’s Catholic Church in Fairfield. Burial will follow at Dew Cemetery. Lois was born in Pierce, Nebraska to Laurine and Ed Miller on November 7, 1946. She attended Sacred Heart Catholic Elementary School from first grade through eighth grade. She attended Norfolk (Nebraska) Catholic High School through her Senior year. Lois joined the U.S. Air Force following high school. There she met and married the love of her life, Jimmie Black, on September 11, 1966, in San Antonio at the Lackland Airforce Base Chapel. After her military service, Lois went to Court Reporting school and worked as a Court Reporter in downtown Houston for many years. When offered a job with her own Labor & Delivery doctor, she took it! She worked as Dr. Trawick’s Family Practice Office Manager for 30 years until her retirement. Lois & Jim raised their children first in Huffman, Tx from 1977-1989. They then moved to the Fairfield/Mexia area where they remained until her death. Lois enjoyed volunteering as the Little League Board Treasurer in Huffman, where her children played baseball and softball. After moving to the Fairfield/Mexia area, Lois became more involved in the Church. She served as an Extraordinary Minister of Communion at St. Mary’s in Mexia. She also served on the parish board and as a Teacher/Aide for the CCE program. Lois served as the Black Family Reunion coordinator for many years, encouraging the families’ attendance. She spent many years caring for her own mother from afar, talking to her on the phone each day and handling all of her medical needs. Lois enjoyed the simple things in life, time spent with family and friends! Lois is preceded in death by her parents, Edwin & Laurine Miller, as well as four children, Jesse Black and three unborn children. Lois is survived by her husband of 54 years, Jimmie Black, children Stacy and Clint Turlington of Katy, Texas; John and Melanie Black of Ennis, Texas; James and Heidi Black of Benicia, California; Siblings Lyle Miller, JoAnn Williams, and Galen Miller, grandchildren Ashley Langston, Robert Ensor, Kade Turlington, Carly Turlington, Korie Turlington, Aiden Black and great-grandchildren Tanner Langston, Lexi Ensor, Brooks Ensor and Gentry Ensor. Her family was the love of her life and where she found her greatest joy! Pallbearers will be John Black, James Black, Clint Turlington, James “Kade” Turlington, Quinn Williams, and Robert Ensor. Honorary pallbearer Aiden Black. Music for Mass will be provided by grandchildren Kade Turlington and Korie Turlington. Mass readers will be granddaughter Carly Turlington and niece Nicole Miller McCarville.

Lois Joy Black, 74, of Mexia, Texas, passed away on May 30, 2021 in Ennis, Texas. Visitation and Rosary will be 6:00 PM Friday the 4th at Griffin-Roughton Funeral Home in Fairfield. A Funeral Mass will be held at 10:00 AM on Saturday, June... View Obituary & Service Information

The family of Lois Joy Black created this Life Tributes page to make it easy to share your memories.

Send flowers to the Black family.