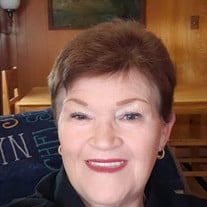 Linda G. Matthews age 71 passed away February 13, 2022, at 3:02 pm surrounded by her family. Linda was born February 8, 1951, in Corsicana to S.T. French and Hazel (Roberts) French. At the age of 19, on January 23, 1971, she married the love of her life James H. Matthews. They were married a loving 36 years before James passed away. Linda worked for Dawson ISD for 30 years before retiring to take care of her husband when he was diagnosed with cancer in 2007. During those 30 years Linda wore many hats. She started out as a cook, became a bus driver, then a teacher’s aide. She then became the secretary where she worked for most of her time at DISD for 3 amazing principals: Kenneth Murray, Clarence Hollingsworth, and Vicki Matthews. After her husband passed away, she went back to work for DISD as the ISS teacher. She later retired again. Linda is survived by her daughters: Cheryl Matthews and husband Jason, and Jennifer Miller and husband Matthew. Six beautiful Granddaughters that were her pride and joy: Jalyn Miller, Chelsea Dibbles, Jade Miller, Ashley Dibbles, Mattie Miller, and Mollie Miller. She also has 3 Great-Grandchildren: Anderson Miller, Alaina Matthews, and the newest addition, Sophia Patterson. One sister, Robin Jenkins and husband Tommy, and several nieces and nephews, and of course her beloved little Chihuahua dog, Sasha. Linda was preceded in death by her husband, James H. Matthews; parents, S.T. and Hazel French; granny Essie Roberts; two sisters, Ann French and Mary Gross; two brothers, Sammie French and Billy French; and her beloved friend Donna Hatfield. Linda was loved by many and was feared by just as many, until they realized her bark was bigger than her bite, and her heart was as big as the sky and as soft as the clouds. Linda will be greatly missed by her family and friends, but anyone that truly knew her, knows she is dancing the streets of gold with her beloved husband, and that is comfort to us. The family of Linda Matthews invites you to the visitation on Thursday, February 17, 2022, from 6-8 PM at Griffin-Roughton Funeral Home in Corsicana. Linda will be laid to rest on the following day Friday, February 18, 2022, at 2 PM next to her husband at Spring Hill Cemetery with Butch Boatright officiating. Pallbearers will be T.J. Boatright, Lance (Bubba) DuBose, David Matthews, Kris Matthews, Heath Chasteen, Wade Matthews, Fred Barrios, and Kevin Matthews. Honorary pallbearers are Matthew Miller, Jason Dibbles, and Chance McQueen.

The family of Linda Matthews created this Life Tributes page to make it easy to share your memories.

Send flowers to the Matthews family.