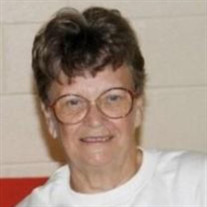 Lillian Ann McClure Thomas, 83 of Blooming Grove, Texas gained her Heavenly wings on Saturday, January 15, 2022, in Corsicana, Texas. Visitation will take place on Wednesday, January 19th from 5:00pm – 7:00pm at Griffin-Roughton Funeral Home. Graveside services will be held at 2:00pm Thursday, January 20th at Lone Oak Cemetery. Lillian was born on August 11, 1938, in Frost, Texas to Joe & Myrtle McClure. She graduated from Frost High School in 1957. Lillian worked as a seamstress, but he worked the most at being a wonderful, loving mother and “Gran” to her grandbabies. Her interest was making clothes for her granddaughters, watching Duke Men’s Basketball. (She was an avid Blue Devil Fan) Supporting all her girls sporting events (she never missed a game that her two daughters competed in) Working in her yard, cooking (she was an awesome cook) and dancing (she taught a few nurses how to dance). Lillian was known by most as “Gran” and she took great pride in being called that. In addition to her parents, Lillian was preceded in death by her husband, Bill Thomas, her brothers and sisters and her beloved granddaughter “Sissy” Krista Elaine Armstrong. Those left behind to cherish her memory include her daughters, Debra Armstrong and Donna Jones. Her son in laws, Mark Armstrong and Kace Cannaday. Granddaughter, Annah Russell and husband Spencer Hipp. Granddaughter, Shelby Clark and husband Justin Clark. Granddaughter Karah Armstrong and her boyfriend, Chance Kirk. Great Grandson, Keegan Armstrong and Great Granddaughters, Hannah and Harper Clark. Sisters, Katie McClure Walters and Callie McClure Harris. The family request that those who wish to express sympathy to make donations to The Dementia Society of America in memory of Lillian McClure Thomas. The family would like to thank the nurses and staff at Legacy, Corsicana, Texas and Bristol Hospice for their kindness and compassionate care. A very special thank you to Jackie McDaniel for keeping the front lawn mowed for all these years and Donna Woodall as her home care giver.

The family of Lillian Thomas created this Life Tributes page to make it easy to share your memories.

Send flowers to the Thomas family.