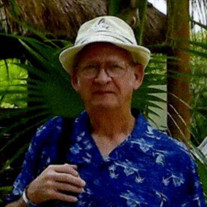 Leonard Ray Clark, 76, of Richland, Texas, passed away on December 10, 2021, in Dallas, Texas after a courageous battle with cancer; surrounded by loved ones who will continue to honor his legacy by living their lives to the fullest. A Memorial Service will be held at Griffin-Roughton Funeral Home Sunday, December 19, 2021, from 4pm. Eddie Jones and Elvin Sikes officiating. Ray was born in Dallas, Texas to Gertrude Grayson and Leonard L. Clark on June 25, 1945. Ray grew up in Seagoville, Texas where he enjoyed playing football and riding hit scooter around town. Ray was a lover of the outdoors, traveling and spending time with his kids and grandkids. Ray enjoyed going on cruises with his wife Kathy, and he was fortunate to visit many places around the world, but Jamaica was hit favorite. During these travels, Ray enjoyed parasailing, site seeing, snorkeling, and enjoying the local culture in each place he traveled. Ray enjoyed building cars with his son Don, building airplanes and sailboats, and fixing things around the house (even if it wasn’t the correct way). Ray was a member of the Carmac Flying Club of Corsicana for over 10 years and had a passion for flying the airplanes he built. He was also a member of Petty’s Chapels Church in Chatfield, Texas. Ray was strong in his relationship with God, and his faith helped him become a better person, role model, husband, father, and grandfather. Ray was a family man, and he enjoyed every moment with his kids and grandkids. He was very proud of the title Papa Ray, and he reminded his grandkids every time he seen them. Ray was selfless in his efforts of being a father and grandfather, and he would do anything in his power to make sure everyone around him wore a smile. His contagious smile, sense of humor, and his personality will be greatly missed. Ray is preceded in death by his father Leonard L. Clark and mother Gertrude Grayson. Ray is survived by his wife, Kathy Clark of Richland; sister, Dorothy Sample of Burleson; sister in laws, Pat Brewer of Mabank, and Renate Brown of Friendswood; children, Don and April Clark of Corsicana; Kim Prowell of Corsicana; Jessica and Tony Davis of Blooming Grove; and Scott and Dee Johnson of Blooming Grove; grandchildren, Josh and Tim Clark of Corsicana, Trent and wife Kalea of Eglin AFB, Florida; Madison, Makenna, Mason and Eli Davis of Blooming Grove; Laci, Lilly, Katy, Tucker and Easton Johnson of Blooming Grove; and numerous nieces, nephews and cousins. In lieu of flower, contributions to the American Cancer Society would be greatly appreciated. Donations can be made online at www.cancer.org, or you can donate by phone at 800-227-2345.

Leonard Ray Clark, 76, of Richland, Texas, passed away on December 10, 2021, in Dallas, Texas after a courageous battle with cancer; surrounded by loved ones who will continue to honor his legacy by living their lives to the fullest. A Memorial... View Obituary & Service Information

The family of Leonard Ray Clark created this Life Tributes page to make it easy to share your memories.

Leonard Ray Clark, 76, of Richland, Texas, passed away on December...

Send flowers to the Clark family.