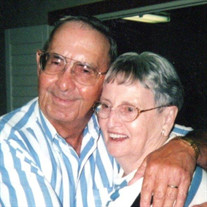 Ramsey Leon Crawford, of Frost, passed away June 9, 2020 at the age of 86. He was born in Brushie Texas, on August 1, 1933. He completed his public-school education in 10 years graduating from Frost High School at the age of 16. (in 1949) He worked various jobs, and eventually enlisted in the Air Force in 1950. He met the love of his life in 1954, (Mary Mosley Crawford), and they were married almost 61 years, until her death in 2015. When he retired from the Air Force in 1971, he moved his family to Frost. He worked at the bank in Frost, then Williams Gin. He retired (again) in 1995. At that time, he was able to devote more time to his favorite pastime: mowing. He loved to mow the yards of many Frost residents, and the yard of Frost Baptist Church, where he and his family were active members. He was a deacon there, and even led the singing there for many years. He also served on the city council in Frost for many years. He and Mary loved going to gospel music concerts, and especially enjoyed The Cathedrals, and the Booth Brothers. He and Mary loved working together making pound cakes. Even after Mary died, he continued to use his mother-in-law’s recipe to make the cakes, and share them with various church members. He was preceded in death by his wife, Mary Crawford; his mother, Annie Ruth Crawford (Thompson); father, Clarence Herman Crawford; sister, Estelle Williams, and brother, Erselle Crawford. He is survived by his son and daughter-in-law, Steve and Debbie Crawford, of Corsicana, daughter and son-in-law, Paula and Clif Sikes of Oak Valley, grandchildren, Rhonda Freeland and Brandon Dowd, Crystal and Pat Joles, Michael Crawford, Allison and Brian Furbush; great grandchildren, Hagen Williams, Bryce Joles, Hunter Joles, Brett Joles, LaKinda Dowd, Ally Dowd and Katie Brady. He is also survived by one sister, Reba Glynell Smith of Whitney, Texas and numerous nieces, nephews and cousins. Visitation will be held Friday, June 12 from 6-8 at Frost Baptist Church. Memorial service will be at Frost Baptist Church Saturday, June 13 at 10:00. There will be no graveside service. Griffin Roughton Funeral home will be in charge of the arrangements. Dr. Darren Heil will be officiating. In lieu of flowers, please consider making a donation to Frost Baptist Church, or the Frost Food Pantry.

The family of Leon Crawford created this Life Tributes page to make it easy to share your memories.

Send flowers to the Crawford family.