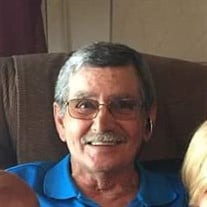 Leo Eugene Travis, age 70, of Corsicana, passed away at Baylor Scott & White Medical Center in Temple on Monday, February 3, 2020. He was surrounded by family when the Lord called him home. Leo was born in Dallas on November 4, 1949 to J.D. and Pauline (Shields) Travis. He was the youngest of five siblings. Leo graduated from Dallas Christian School in 1968 and enlisted in the United States Armed Forces the following summer. During the Vietnam War, Leo served six years as a sergeant in the 443rd Supply Squadron of the U.S. Air Force. He was awarded the National Defense Service Medal and the Republic of Vietnam Campaign Medal for his time in the Air Force. After his honorable discharge, Leo moved to Corsicana and married Pam. He enjoyed family time and being with his three children Bodie, Tamara, and Ashley. Leo was the type of father that you would find teaching baseball in the front yard or playing basketball in the driveway. Any spare time he had was spent with his children. Leo worked as a maintenance journeyman at Chattanooga Glass in Corsicana and later at Ball Foster Glass in Waxahachie. He was a hard worker and often put in long hours with much overtime to provide for his family. He retired in 2015 after working almost 40 years in the glass industry. Leo will forever be remembered for his selfless devotion to his family. His loved ones knew they could always count on him when help was needed. Whether it was a flat tire, broken washing machine or assistance building a deck, Leo was the one there helping, day or night. He was knowledgeable on various trades and could repair just about anything. Leo’s love for his three children was unconditional. He supported them in every aspect of their lives. Leo loved to share pictures and stories of his children and their families with everyone he came in contact with, from his pharmacist to random strangers. He was such a proud father. Leo found joy in being around his grandchildren and great grandchildren. He loved getting to attend their sporting events and other school activities. If Leo could’ve had it his way, he wouldn’t have missed any of their events, but unfortunately toward the end of his life, his poor health prevented him from doing as much as he would’ve liked. Leo was very loved by his family and will be missed by many. He was preceded in death by his parents J.D. and Pauline Travis; mother-in-law Ida Blue; and siblings James, Peggy, and Billy. He is survived by spouse Pam Travis and “fur baby” Chloe of Corsicana; son and daughter-in-law Bodie & Lindsey Travis of Blooming Grove; daughter & son-in-law Tamara & JC Rogers of Hillsboro; daughter & son-in-law Ashley & Landon Allen of Bryan; Father-in-law M.H. Blue Jr. Grandchildren include Katie & Dylan Borsellino; Lorn Travis; Clay Travis & Lauren Travis; Haley, Hannah “Kaitlyn” & Heather Rogers; Avery, Izzy & Jace Allen. Great-grandchildren include Kelsie & Lillie Borsellino. And sister Barbara Moore of Barry and sister-in-law Judy Travis of Plano. Service will be held at Griffin-Roughton Funeral Home on Thursday, February 6th at 10:00am with Timothy Ray Schane officiating.

Leo Eugene Travis, age 70, of Corsicana, passed away at Baylor Scott & White Medical Center in Temple on Monday, February 3, 2020. He was surrounded by family when the Lord called him home. Leo was born in Dallas on November 4, 1949 to J.D.... View Obituary & Service Information

The family of Leo E. Travis created this Life Tributes page to make it easy to share your memories.

Leo Eugene Travis, age 70, of Corsicana, passed away at Baylor...

Send flowers to the Travis family.