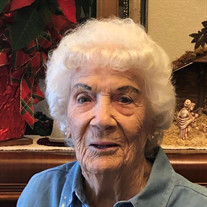 Lena Lucille Forner Worley passed away quietly from Alzheimer's on September 5, 2020 at her assisted living facility at Heritage Oaks in Corsicana where she had been a resident for the past five years. She was born to tenant farmers Dick and Allie Forner in Hutchins, Texas on September 26, 1919. She was preceded in death by her parents and ten siblings. She met and later married Alf D. "Joe" Worley from DeSoto, Texas on January 21, 1940. They worked his family farm helping his mother Ella Dean until 1970 when they moved to Lancaster. Always a homemaker and a hard worker with the motto "You use it or you will lose it", Lucille went to work at West Main Elementary in Lancaster in the lunchroom. She loved her job and children and soon became the lunchroom manager there and retired after twenty years. She remained busy caring for and loving her family. You could find her doing yardwork way into her 90's. Her husband Alf D "Joe" of 67 years passed away on January 24, 2003. She is survived by her two children. Their son Don and daughter in love Sandra Worley of Purdon, Texas and their daughter Susan Bickell of Palmer, Texas. She has four grandchildren: Beth Ann and husband Jay Walker of Harker Heights, Texas, Todd and wife Kelly Worley of Houston, Texas and grandsons Phillip Bickell and Neill Bickell of Palmer, Texas. She has five great grandchildren: Sally Beth and Samuel Walker of Harker Heights, Texas, Brooke and Ro Rojas of Dallas, Texas, Nicole and Chase Cromartie of Houston, Texas and Madison Worley of Houston, Texas. Three great great grandchildren: Luke and Alec Rojas of Dallas, Texas and McKel Cromartie plus a little brother due in December for Houston, Texas. She is also survived by a sister in law Ann Worley Bell of McKinney, Texas and numerous nieces, nephews that share her love. Lat September her family celebrated her 100Th Birthday which was her huge delight to share that special day surrounded by family and friends. A celebration of her life will be held September 11, 2020 at 10:00am at the Frist Baptist Church in Blooming Grove with Bro. Grady Cashion officiating. A graveside service will be held later that day at 1:30pm at the Edgewood Cemetery in Lancaster on Nokomis Road.

Lena Lucille Forner Worley passed away quietly from Alzheimer's on September 5, 2020 at her assisted living facility at Heritage Oaks in Corsicana where she had been a resident for the past five years. She was born to tenant farmers Dick and... View Obituary & Service Information

The family of Lena Lucille Worley created this Life Tributes page to make it easy to share your memories.

Send flowers to the Worley family.