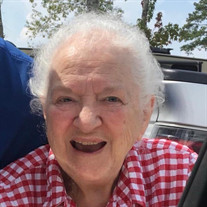 Sylvia Leatrice “Lea” Sisco - Lea was born April 29, 1932 in Bartlesville, OK to Victor Guy and Sylvia Ann Burton. She left peacefully for her heavenly home on August 8, 2021. She lived 89 blessed years. She attended Tulsa Central High School and went on to Baylor University where she met the love of her life, Jack Sisco. They married November 26, 1953 at Nogales Avenue Baptist Church in Tulsa, OK. They resided in Lancaster, Texas until 1965 when they moved to Dallas. She was a member of Scofield Bible Church in Dallas, TX. Lea was a phenomenal wife, mother, grandmother, sister, aunt, fabulous cook, and cake decorator. After her children were grown, she went to work for Dallas ISD until her retirement in 1993. She and Jack then moved to Corsicana, TX, and spent the summers at their summer home in Creede, CO. The apples of her eye were her grandchildren whom she enjoyed spending time with in the mountains. Lea was preceded in death by her husband of 67 years, her parents, her sister Shirley Terry, her sister Janis Briggs and her brother Joe Burton. Lea is survived by her children Jeff Sisco, Sue Ann Maler and husband Rich. She was “Mommo” to Jeff Sisco, Jr. of Granbury, Jaclyn Wilhelm of Flower Mound, Sarah Vrla of Flower Mound, Emilee Sisco of Enumclaw, WA, Gabrielle Sisco of Paris, France, Tim Morris of Burleson, Eric Maler of Corsicana, Luke Maler of Corsicana, and Jack Maler of Corsicana. She had 10 great grandchildren and numerous nieces and nephews. She will be missed more than words can ever express, but we have the Peace and Hope in Jesus that we will be reunited again one day. Proverbs 31:10-12 Who can find a worthy woman? For her price is far above rubies. The heart of her husband trusts in her. He shall have no lack of gain. She does him good, and not harm, all the days of her life. Visitation will be held with the family Thursday evening from 6-8pm at Griffin - Roughton Funeral Home. A graveside service will be held Friday, August 13, 2021 at Oakwood Cemetery beginning at 11:00am. In lieu of flowers donations may be made to: Roloff Homes Ministry 1355 FM 665 Corpus Christi, Texas 78415 (phone # 361-852-1155)

The family of Lea Sisco created this Life Tributes page to make it easy to share your memories.

Send flowers to the Sisco family.