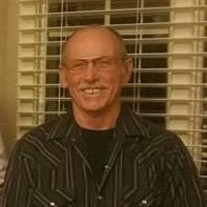 Larry Kent Riemenschneider, 64, of Dawson, passed away on February 27, 2021 in Temple. Tx. Visitation will be 6pm-8pm Wednesday, March 3, 2021 at Griffin-Roughton Funeral Home Funeral services will be held 11am Thursday, March 4, 2021 at Griffin-Roughton Funeral Home with the Floyd Petersen, officiating. Burial will follow at Oakwood Cemetery. Arrangements are by Griffin-Roughton Funeral Home. Larry was born in Marshalltown, Iowa to Ken and Loretta Riemenschneider on August 16, 1956. He went to school at Clarke High School. He married Kim Waller on September 27, 2008 in Corsicana, Tx. He was a veteran and served in the Army and was discharged as an E4. Larry is preceded in death by both parents, and 1 son; Phillip Riemenschneider. Larry is survived by his wife; Kim, children; Jason (Cassie), Jacob, Kim, Jeff, Michael (Tami), Amy (Jerry), and Tiffanie. And a host of grandchildren, nieces, and nephews Pallbearers will be Ricky Gilliam, Charles Lucas, Chris Govan, Jerry Glidewell, Michael Randel, Jason Riemenschneider, and Cody Nehsmith.

The family of Larry Kent Riemenschneider created this Life Tributes page to make it easy to share your memories.

Larry Kent Riemenschneider, 64, of Dawson, passed away on February...

Send flowers to the Riemenschneider family.