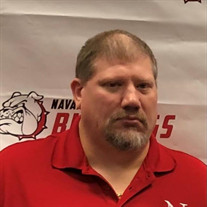 Kevin Allen Stephens, 48, or Corsicana passed from this life on January 7, 2021 in Marietta, Oklahoma. He was born on August 5, 1972 in to Herchel and Jo Nell Barron Stephens. Kevin was born and raised in Corsicana, Texas graduating from Corsicana High School in 1991. In his youth years Kevin enjoyed playing YMCA soccer, backyard football and baseball with his brother and ALL of the neighborhood friends. Kevin was an avid athlete with the Corsicana Special Olympics for many years and eventually transitioning to a Special Olympics coach. Kevin also loved his bowling and all of the amazing league bowlers that he bowled with for many, many years. Kevin was a sports fanatic and could tell you just about anything you wanted to know about any sport. Kevin loved his Corsicana Tigers football, Navarro Bulldogs, Texas Rangers, Dallas Cowboys and unfortunately the Oklahoma Sooners “Hookem’ Horns”. Kevin was sure to brag every time the Sooners beat the Longhorns and he got to brag a lot over the past few years!! Kevin learned to love cooking and was actually a pretty good cook. He always told his brother he would one day cook brisket and ribs better than his. His ribs were getting very close!! Kevin loved his country music as much if not more than his sports. If you ever needed to know who sang a song you just ask Kevin. George Strait was his king and Alan Jackson ran a very close second. Kevin always talked about his trip to Vegas with his brother to see his “King” live and in person. Kevin loved dancing with his sister-in-law’s. Kevin enjoyed family cook-outs at his brothers and was always the last to leave. Kevin adored and loved spending time with his niece, Addison “Addie” Oliphant, and his nephew, Ethen “Ebug” Kuykendall. Kevin fell in love with his “Beautiful Princess” in 2017 and he loved her dearly. They traveled frequently allowing Kevin to see things he had never experienced. On his last trip he got to eat at Toby Keith’s Restaurant not once but twice, and of course it wasn’t the food, it was “Toby Keith’s”. Kevin was truly one of a kind. Kevin was difficult at times but he was also very loving, caring and always thinking of others. Kevin is now home with his father and will be truly missed. He was preceded in death by his father, Herchel Stephens; grandparents, Ruth Barron and Morris "Pop" Barron, Avis Stephens and husband Curtis Stephens. He is survived by his "Beautiful Princess" Brenda Sudduth; mother, Jodie Stephens; brother, Scott Stephens and wife Chelena; sister, Kerri Oliphant and husband Terry; nieces, Addison "Addie" Oliphant and Chelsea Thomas; nephews, Chase Thomas and Ethen Kuykendall "Great Nephew"; uncle, Phil Barron and wife Paula Barron and many cousins, and other family members. Visitation will be Thursday, January 14, 2021 from 6:00pm-8:00pm at Griffin-Roughton Funeral Home. Funeral Service will be held 11:00am Friday, January 15, 2021 at Griffin-Roughton Funeral Home. Burial will follow at Oakwood Cemetery. Pallbearers will be Jeff Hodge, Jason York, Billy Sykes, Brandon Dowd, Blake Funderburk, Phil Barron, Ricky Martinez and Kevin Funderburk. Honorary Pallbearers will be Stan Roberts, Gary Dowd, Ron Morrison, Corsicana Special Olympics, Dr. Kent Rogers, Gary Lane.

Kevin Allen Stephens, 48, or Corsicana passed from this life on January 7, 2021 in Marietta, Oklahoma. He was born on August 5, 1972 in to Herchel and Jo Nell Barron Stephens. Kevin was born and raised in Corsicana, Texas graduating from... View Obituary & Service Information

The family of Kevin Stephens created this Life Tributes page to make it easy to share your memories.

Kevin Allen Stephens, 48, or Corsicana passed from this life...

Send flowers to the Stephens family.