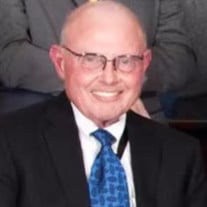 Dr. Kent Rogers, MD, 75, passed away at Navarro Regional Hospital in Corsicana, Texas on Saturday, January 30, 2021 after a weeks-long fight against COVID-19. Dr. Rogers was born December 8, 1945 in Arkansas City, Kansas to Carl E. and Jaunques Rogers. He grew up in Mt. Pleasant and graduated from Mt. Pleasant High School in 1963 as Valedictorian of his class. He married the love of his life, Donna Jo Smith, and attended Rice University where he graduated in 1967. He went on to UT Southwestern Medical School, again graduating top of his class and receiving the Ho Din, the highest award conferred to a graduate for both high academic achievement and commitment to the medical profession. He interned at Massachusetts General Hospital in Boston. After two years of service in the US Navy, he completed his residency at Parkland Hospital in Dallas. He then settled with his family in Corsicana, Texas. Rogers was affiliated with Medical Arts Clinic in Corsicana for 29 years, serving on the clinic's board of directors in addition to his medical practice. He joined Trinity Clinic in 2005, and Medical and Surgical Associates of Corsicana in 2009. Rogers was chief of staff at Navarro Regional Hospital for two years, and medical director of the hospital's ICU for six years. While working in private practice, Dr. Rogers was the medical director of Legacy West Nursing Home, Heritage Oaks Village, Trisun Nursing Home, and the Corsicana/Navarro County Health Department. Dr. Rogers also served the community on the Corsicana Independent School District School Board for many terms, including in the role of President. He also was the team physician for the Tiger football program for several years. He was honored with the dedication of a bronze statue in downtown Corsicana in May 2019. A beautiful memorial service was held at Tiger Stadium in Corsicana on Wednesday, February 3, 2021 and can be accessed via YouTube by searching “Dr. Kent Rogers Memorial”. Dr. Rogers attended St. John’s Episcopal Church in Corsicana for many years and will be interned at the columbarium there at a later date. Dr. Rogers is survived by his wife of 57 years, Donna Jo (Smith) Rogers; children, Cyndi Rogers of Corsicana, Suzi and Dean Nelson of Austin, Mark and Jennifer Rogers of Dallas; Natalie and Nicholas Nelson, grandchildren; mother, Jaunques Rogers of Corsicana; brother, Phil and Sally Rogers of Los Angeles, California; and several nieces and nephews. He was preceded in death by his father, Carl E. Rogers, and sister, Carla Rogers Carter. Memorials may be directed to UT Southwestern Medical Center at PO Box 910888, Dallas, Texas 75391 or engage.utsouthwestern.edu to support the creation of a scholarship in memory of Dr. Kent Rogers; and/or to St. John’s Episcopal Church, 101 N. 14th St, Corsicana, Texas 75110. Memorial Service will be held 5:00pm Wednesday, February 3, 2021 at Tiger Field.

The family of Dr. Kent Rogers created this Life Tributes page to make it easy to share your memories.

Send flowers to the Rogers family.