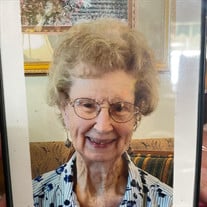 JENKINS, JOYCE ADAMS, 86, of Blooming Grove, TX died on July 25, 2020 at Brookdale Senior Living Center in Waco. Joyce was born on January 8, 1934 to Virgil Simmons Adams and Hazel Eva Robertson Adams of Pampa, TX and was preceded in death by her parents; husband, Bill B. Jenkins, Sr. and siblings, Frank Adams and Patricia Shelton. She is survived by her sons and daughters-in-law, Bill Jr. (Bud) and Cynthia Jenkins of West, TX, and Jeffrey and Martha Jenkins of Blooming Grove, TX; grandchildren, Mandy and John Norwood of Houston, TX, Cody and Bristi Jenkins of Suwanee, GA, and Amy and Jonathan Alvis of Spring, TX, Adrienne Harper of Snook, TX and Victoria (Tori) Jenkins of College Station, TX; great-grandchildren Aikan, Ainslee, Blaiklee and Cainan Jenkins of Suwanee, GA, Sloane Alvis of Spring, TX, Jerich and Gavin Harper of Snook, TX, and Jack and Eli Norwood of Houston, TX; brother, Glen Adams of Granbury, TX and sisters, Aurelia Gallagher of Flint, TX and Sue Lewis of Farmers Branch, TX; and numerous nieces, nephews and other relatives. Joyce was a 1950 graduate of Pampa High School at age 16. She attended Wayland Baptist University. She started working for Citizen’s Bank in Pampa in 1950, where she was introduced to Bill by her coworker and Bill’s brother, John. Bill and Joyce married in 1956 in Pampa and their two sons were soon born. They moved to Bay City, TX in 1964 where Joyce was a secretary for BCISD for 21 years before retiring in 1989. Bill and Joyce moved to Blooming Grove in 2007 where Joyce was active in Central Baptist Church and formerly First Baptist Church of Bay City. She was also an active member of the Young at Heart Club and the Blooming Grove Lions Club. Visitation will be held from 10 am to 11 am on Saturday, August 1, 2020 at Central Baptist Church, Blooming Grove, TX with services following at 11 am with Darren Heil officiating. Internment will be at Dresden Cemetery. Memorials may be sent to Central Baptist Church, PO Box 286, Blooming Grove, TX 76626 or the charity of your choice. The family would like to thank the Brookdale Senior Living Center, Lake Brazos in Waco for the loving care provided to Joyce over the last four months.

The family of Joyce Jenkins created this Life Tributes page to make it easy to share your memories.

Send flowers to the Jenkins family.