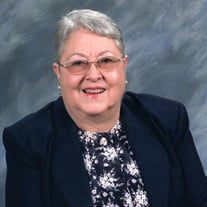 Joyce Marie Dyer Humbert was born September 20, 1937 in Corsicana, Texas to Willie Eugene Dyer and Mary Elta Ellis. She was the youngest of ten children. She went to be with the Lord on May 17, 2021. Joyce married Marcus Edwin Humbert on June 1, 1956. She was a member of First Baptist Church in Corsicana since 1965. She was preceded in death by her parents, 5 brothers, Thomas Dyer and his wife Juanita, Ira Lee Dyer and wife Lola, Bennie Dyer, Buford Dyer and WA Dyer and wife Iona; three sisters, Evalena Pate and husband Doug, Erma Matthew and her husband Bart, and Emma Brewer and husband Aubrey. She is survived by her sister, Henrietta Ellis of Farmers Branch; sister-in-law, Kay Beth Jackson of Arlington and sister-in-law & brother-in-law, Bill and Lucy Humbert of Angel Fire, New Mexico; daughters', Deborah Crow and husband Donnie of Waxahachie, Donna Whittenburg and husband Gaylon of Corsicana, Dana Lord and husband Cliff of Coolidge. Grandchildren, Trey and Bridget Crow, Mark and Veronica Crow, Jeff and Dawn Roddy, Brandi and Chad Hildebrand, Clayton Lord and Colton Lord; great grandchildren, Madalyn, Carson, Lauren and Jackson Crow, Stefani, Hector, Jaden and Ella Crow, Albert Fuller, Dalton Roddy, Anna and Delia Wiggins. She is also survived by numerous nieces, nephews and family. The family would also like to thank the staff at The Village at Heritage Oaks for all their love and care. We could not have provided the care needed that last two and a half years without you. We love and appreciate you all. Visitation will be Thursday, May 20, 2021 from 10:00am - 11:00am at First Baptist Church. Funeral Service will follow at 11:00am at First Baptist Church with Dr. Danny Reeves officiating. Burial will follow at Hamilton-Beeman Cemetery. Pallbearers will be Danny Dyer, Rickey Dyer, Lowell Dyer, Mark Jackson, Mark Crow, Clayton Lord. Honorary Pallbearer Lanny Dyer and Pat Brewer.

Joyce Marie Dyer Humbert was born September 20, 1937 in Corsicana, Texas to Willie Eugene Dyer and Mary Elta Ellis. She was the youngest of ten children. She went to be with the Lord on May 17, 2021. Joyce married Marcus Edwin Humbert on June... View Obituary & Service Information

The family of Joyce Humbert created this Life Tributes page to make it easy to share your memories.

Send flowers to the Humbert family.