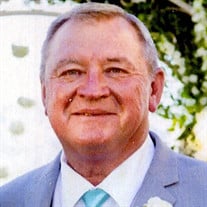 Johnny Mitchell Cooley, 66, passed away on January 30, 2022 after some serious health issues this past year. He was born in Abilene, Texas, on September 22, 1955, to Lloyd David Cooley and Patricia LaNell Cooley, his mother, who preceded him in death. Mitch was her first born son, and he made sure everyone knew it, especially his sisters. After graduating from Robert Lee High School, Mitch worked in the oil field until he went to work in Brownwood, Texas, for Texas Power & Light as a janitor while attending school at Howard Payne University. During his 40 plus years, Mitch worked his way through the ranks as a lineman, crew foreman, local rep., M & C Supervisor, and retired as the Western Region Safety Representative for Oncor Electric Delivery. Being a safety rep. was a dream come true for him, and he not only thoroughly enjoyed that part of his career but took great pride in it. Mitch was a son, father, husband, brother, and a friend to many. He loved nothing more in this life than his family and being outdoors. As hard as he worked, he always found time to coach a little league game or take his boys fishing. His favorite place was in a boat with his two sons catching fish. Anyone who knew him knew he could tell a fish story, and the fish might occasionally grow in size and ferocity. Mitch is survived by two sons, Travis Cooley of Valdosta, Georgia and Chad Cooley and wife Jennifer; grandsons Hayden and Morgan of New Braunfels, Texas; Father Lloyd David Cooley; sisters Donna Finkbeiner and husband Terry, Brenda Hancock and husband Kerry, and Linda Dunbar and husband Bill. He was loved dearly by his family, friends and respected by his colleagues, and will be sorely missed by everyone who had the pleasure of knowing him. Take consolation in that he is no longer in pain but with the Lord…never forgotten and loved without end. A memorial service will be held 12:00 pm Wednesday, February 9, 2022, at Griffin-Roughton Funeral Home, Fairfield.

Johnny Mitchell Cooley, 66, passed away on January 30, 2022 after some serious health issues this past year. He was born in Abilene, Texas, on September 22, 1955, to Lloyd David Cooley and Patricia LaNell Cooley, his mother, who preceded him... View Obituary & Service Information

The family of Johnny Cooley created this Life Tributes page to make it easy to share your memories.

Send flowers to the Cooley family.