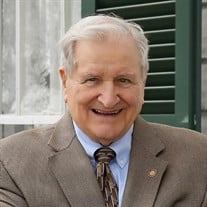 Joe Lee Kirgan, Jr., went peacefully at home to be with his Lord on Friday, January 29,2021. Joe Jr was born March 6, 1930 in Sweetwater, TX to parents Joe Lee Kirgan Sr and Vaudiene Wilson Kirgan. The family moved to Fairfield in 1945 when his grandfather, LC Kirgan, “Papa”, needed help running the Fairfield Recorder. Soon after moving to Fairfield, Joe Jr met Bette Ann Nettle and she became the love of his life and his wife for 56 years when cancer took her from him. Joe and Bette had three children: Joe Lee III, Kay Ellen, and Charles Jeffery. Joe and Bette attended Baylor University briefly and always followed the Bears. He and Joe Cliff Bell were better than average on the tennis court and one of his sports highlights was when he and Joe Cliff beat the top Baylor men’s doubles team. Of course, his very favorite highlight was being on the 1946 Fairfield Eagles Regional Championship Football team. Regional Champion was as far as you could go, there was no state championship back then. Being born with ink in his blood, Joe Jr from an early age worked at the newspaper with his father Joe Lee, or his grandfather, Papa. Great-grandfather JA Kirgan founded newspapers in Trinity, Groveton, Crockett, Corrigan, Malakoff, Hubbard, and Dawson. Joe Lee Sr worked on the Sweetwater Reporter until moving back to Fairfield to run the Recorder when his brother Ramon was drafted into the Army. Joe Jr was with the Sweetwater Reporter, Baylor Press, Dallas Times Herald, and Polk County Enterprise where he was recognized as the youngest Editor in Texas by the Texas Press Association in 1956. He moved home to Fairfield in 1960 to take over the Fairfield Recorder when his father Joe Lee was diagnosed with Leukemia and passed away. Joe Jr was Editor, Publisher, and Owner/Co-owner of the Recorder over the years from 1960 – 1985 when he sold the family newspaper. As a journalist in Livingston, he supported the community, always with the best interests of the people in mind. Joe was instrumental in the adoption of the Polk County stock law that was hotly contested by ranchers who grazed the open range. When adopted in 1957, it brought him respect and admiration even from the opponents of the stock law who realized following its adoption that it helped those opposed as much if not more than those supporting it. One free range rancher who had several times threatened to kill Joe later thanked him, saying she had never made as much money in the cattle business before adopting the stock law. During that same period his powerful editorials and correspondences ended the stalemate between the City of Houston and the Trinity River Authority resulting in the agreement to construct Lake Livingston, the second largest lake totally within the state boundaries. Joe Jr. brought his journalistic gift home to Fairfield and his ever popular “This N That” brought enjoyment to his community. The news was always reported in a fair and unbiased manner. Joe loved his hometown and until the day his tenure ended on the City Council, he always gave his all to make Fairfield and the surrounding area a better place for all citizens. Joe Jr served as Fairfield Chamber of Commerce President, Fairfield Rotary Club President, FISD School Board member, and President and Charter member of Freestone Country Club. Due to his love of basketball and kids, Mr. Kirgan helped organize Fairfield Little Dribblers Association and was also a Coach. Joe also officiated high school football and high school and college basketball. Shortly following his 90th Birthday party, Joe became ill and underwent surgery for quintuple heart bypass. Until then he taught Sunday School at First Baptist Church. Joe Jr was for over 65 years a member of the Masonic Lodge and a 32nd Degree Mason. He served 15 years on the Fairfield City Council and served as Mayor Pro-Tem for 7 years. On January 28, 2017 Joe Jr received the Fairfield Chamber of Commerce Lifetime Achievement Award for his service to the community. Beyond his local service Joe served as Rotary District 587 Governor, on the District Board of the Boy Scouts of America, as Vice-President of the Advisory Board of the Texas Press Association, and on the Advisory Board of Texas State Technical Institute. Joe Jr had a very full life with many friends and a wonderful family. Preceding him in death were his parents Joe Lee Kirgan, Sr and Mary Vaudiene Wilson Kirgan Boyd and Daughter-in-law Monica Diane Cockerham Kirgan. Joe is survived by his children Joe Lee, III and daughter-in-law Susie, Kay Kirgan Watkins and son-in-law Jerry, and Jeff Kirgan; five grandchildren, Matt Kirgan, Angie Kirgan, Joe Lee “Jody” Kirgan, IV and wife Jodi, Ashley Watkins Feldt and her husband Jake, Lane Watkins; five great-grandchildren, Sawyer Kirgan, Brady Vance, Lindsey Vance, Dax Feldt, and Doak Feldt; and great-great grandson, Jaden Vance. The family would like to express their gratitude to Encompass Healthcare, Hearts of Gladys, Reliant at Home Hospice, Dr. Orms, and Dr. White, with special thanks to Judy, Erika, Kelsey, Joann, Kris, Evelyn, Lakesha, Donna, and Claudia. In lieu of flowers, please consider a memorial gift to Operation FINALLY HOME, his favorite charity. Gifts to this organization are utilized to provide new homes and home modifications for wounded, ill, or injured Military Veterans and First Responders. Go to www.operationfinallyhome.org and click “Donate” on the top banner. Visitation will be Thursday -Friday 9:00 am - 4:00 pm Griffin-Roughton Funeral Home, Fairfield. Graveside service will be 1:00 pm Saturday, February 6, 2021 at Fairfield Cemetery with Dr. Richard Heyduck officiating.

Joe Lee Kirgan, Jr., went peacefully at home to be with his Lord on Friday, January 29,2021. Joe Jr was born March 6, 1930 in Sweetwater, TX to parents Joe Lee Kirgan Sr and Vaudiene Wilson Kirgan. The family moved to Fairfield in 1945 when... View Obituary & Service Information

The family of Joe Lee Kirgan created this Life Tributes page to make it easy to share your memories.

Joe Lee Kirgan, Jr., went peacefully at home to be with his Lord...

Send flowers to the Kirgan family.