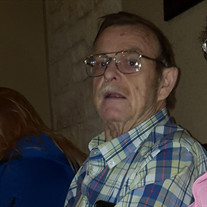 Jessie Lynn Praytor, Jr. left his earthly life in flight to Heaven to meet his Lord and Savior Jesus Christ face to face on February 4, 2021 at the age of 68. He was born on March 4, 1952 to Jessie and Miriam Praytor, both which were waiting at the Heavenly gates to welcome him home. Jessie Lynn, as most called him, was a loving husband, father, grandfather, uncle, brother and friend. As most have said he was a protector even in his younger days. He loved the Lord and it showed when he shared is gift of singing with others. He grew up singing when the family would gather around the piano to sing. He lead many church services as a music director and would sing specials any chance he could. Jessie Lynn loved to hunt, collect old model cars and spend time with his family. Most of you probably remember his 1970 blue with white striped Corvette SS 396. He also liked good deals, so if you wanted to know what was on sale just ask him. Jessie worked hard his whole life. He started working at a young age with his father doing carpentry work. He also worked as a manager at Jack in the Box, Tom's Foods, and then retied from James Manufacturing after twenty years. He graduated from Corsicana High School in 1970. He married his high school sweat heart Nancy McKnight on June 17, 1972. Jessie and Nancy enjoyed raveling and carried the grandkids with them a time or two. Jessie leaves behind his wife Nancy, sons and daughters Jessie L. and Tiffany Praytor III of Navarro Mills, Eddie E. and Kristy Praytor of Dawson and Joseph A. and Tonya Praytor of Kerens. He also left behind grandchildren : Jacob, Serria, Cheyanne, Zane, Becca and Maddie Praytor. Brothers Royce Sr., Cloyce, and David Praytor and sister Janice Crumpton and husband Clyde. Sister-in-laws and brother-in-laws Donna and Terry Paul, Janet and Joe Cook, Ronnie and Linda McNight and Gracie and Jerry Trent. Uncle Lewis "Son" Tanner and aunt Reba Gullett and Faylene Dick, sister at heart Patricia and Roy Franks, as well as many other family members and friends. Jessie is preceded by his parents Jessie and Meriam Tanner Praytor, father -in-law Edward Earl McKnight, mother-in-law Faye McKnight, brother-in-law Lucky Meddlock, niece Joy Praytor and several aunts , uncles and cousins. Visitation will be 2-5pm Sunday, February 7, 2021 at Griffin-Roughton Funeral Home. Funeral Service will be 10:00am Monday, February 8, 2021 at Westside Baptist Church with Rev. Larry Talbert officiating. Burial will follow at Hamilton-Beeman Cemetery. Pallbearers will be Terry Paul, Joseph Praytor, Royce Praytor Jr., Rowdy Praytor, Jerry Trent and Tommy Oliphant. Memorial can be made to his home church Westside Baptist Church in Corsicana.

Jessie Lynn Praytor, Jr. left his earthly life in flight to Heaven to meet his Lord and Savior Jesus Christ face to face on February 4, 2021 at the age of 68. He was born on March 4, 1952 to Jessie and Miriam Praytor, both which were waiting... View Obituary & Service Information

The family of Jessie Praytor, Jr. created this Life Tributes page to make it easy to share your memories.