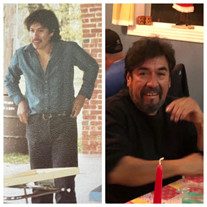 Jesse Santos Gonzales went home to be with Christ on Thursday, November 4, 2021. Jesse loved our Savior! He believed, trusted, praised, was a witness for Christ and had faith in God our father. A celebration occurred on November 4, 2021. Jesse was reunited with his loved ones! Jesse was born in Navarro clinic in Corsicana, Texas on November 1, 1957. Jesse married his first love, Olivia Hernandez in 1978-1980 and no children were brought forth from this marriage. Jesse had a passion for hot rod cars, nature(trees), and the Dallas Cowboys. He was a hardworking self-employed man. He will truly be missed. We have comfort knowing his is celebrating in heaven! He is preceded in death by his mother Dolores Del-Rio Gonzales and his brother and sister-in-law Aurelio and Jerri Saldivar. He is survived by his daughter Jessica Lynn Whisenart and grandchildren Chloe and Landry Diltz; brother, Cecil Ray Saldivar; sister, Delores Fay Francia and brother-in-law, Jose G. Francia; nephew, Joseph Francia and spouse Analisa; nieces, Ireland and Evanqeline (Pearl) Francia, Kimberly and Elizabeth Saldivar, Tracie and spouse Thomas Sauer; great-nephews, Skyler Francia, Christian and Ian Mershawn; great-nieces, Emma Mershawn, Norah Lynch, Eleanor and Tomi Sauer. Jesse had numerous cousins, especially his cousin Michael Joles who he considered his brother. Jesse also leaves behind his dear friend Paula Lauhead. Jesse loved all his family members very much; sister, brothers, nephew, nieces, brother and sisters-in-law, and cousins. Visitation will be held at Griffin-Roughton Funeral Home on Sunday, November 7, 2021 from 1:30-2:30pm. The graveside service will follow at Hamilton-Beeman cemetery at 3:00pm where he will be laid to rest beside his mother, brother and sister-in-law. Pallbearers for the service will be Jose G. Francia, Joseph Francia, Michael Joles, Thomas Sauer, Christian Mershawn, and Fitzhugh Cobb.

The family of Jesse Santos Gonzales created this Life Tributes page to make it easy to share your memories.

Jesse Santos Gonzales went home to be with Christ on Thursday,...

Send flowers to the Gonzales family.