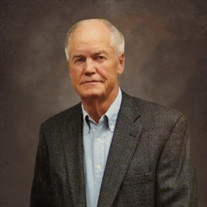 Jerry Bluford Robinson, 80, of Fairfield, passed away January 16, 2021 at his residence. Jerry was born June 9, 1940 to Bonner Weaver Robinson and Frances Nettle Robinson at their home in Steward’s Mill Texas. He was a 1959 graduate of Fairfield High School where he lettered 4 years in both football (captain, all district, all Cen-Tex) and basketball (co-captain and all district). He served as 4-H club president for four years (Gold Star Award), president of the Fairfield FFA, and his peers voted him “Best All Around” his senior year. Throughout his life, Jerry continued to be an avid Fairfield Eagle sports fan. He attended football games and other sporting events when able, and faithfully followed Eagle sports on the radio in his later years. Jerry attended Texas Christian University for 3 years on a football scholarship. After suffering a career ending knee injury, and resulting serious infection, he returned home to Fairfield and married Gloria Jean Blakley on July 12, 1963. His first job was as an employee of the WX ranch for Frank and Christine Masters in Steward’s Mill, where he performed daily cattle and ranching operations. In 1965, Jerry accepted a job with the Texas Employment Commission and worked in the Waco, Mexia, and Palestine offices of the TEC until 1984. During this same time period, he also established a commercial cow-calf operation. After leaving the Texas Employment Commission, Jerry worked full-time as a cattle rancher, fulfilling his life-long dream and passion for cattle ranching in Freestone County. His cattle venture also afforded Jerry the opportunity to ranch alongside his son, Blake, for many years. Jerry particularly enjoyed raising registered Brahman cattle from 1975-early 1990’s. Recognizing the importance of the cattle industry to Texas, he was a member of the Texas and Southwestern Cattle Raisers Association, the American Brahman Breeders Association and the Texas Farm Bureau. Jerry served his community in many different leadership positions including Board of Directors for Fairfield State Bank, Freestone County Soil and Water Conservation District and the Freestone County Farm Bureau, where he served as president for 5 years, and in 2015 was awarded the Texas Farm Bureau Pioneer Award for 50 years of service as a Texas Farm Bureau director. He was a past president of the Fairfield High School Eagle Booster Club and coached multiple years in the Fairfield Little Dribblers organization. He also served many years as a caretaker and treasurer for the family’s Bonner Cemetery. Jerry’s faith was a big part of his life and he was an elder of Fairfield Presbyterian Church until he and his family joined the First Baptist Church in Fairfield where he continued to serve for many years. Jerry spent his entire life in Freestone County and loved his alma-mater and community. He loved the great outdoors, working on his Freestone County ranch, and always looked forward to opening weekend of deer season. He had many fond memories of good fellowship, great food and stories from the family deer camp. Jerry had many friends and touched many lives with his kind heart, gentle spirit and gracious personality. He was an optimist with an “it will always work out” approach to life. He chose to see the good in people and never took for granted life’s blessings. He was a loving husband and a wonderful father who was so very proud of his grandchildren and great-grandson. Jerry is survived by his wife of 57 years, Gloria Jean; two children, Jina Fuller and husband Mike of Tyler, Blake Robinson and wife Audra of Fairfield; grandchildren Morgan Wood and husband Daniel of Tyler, Madison Evans and husband Drew of Tyler, Mallory Fuller of Tyler, Ivy Robinson and Ally Robinson of Fairfield; great-grandson, Baker Robinson Wood; brother Charles Mac Robinson and wife Sandy of Teague; and many beloved nieces, nephews and cousins. He was preceded in death by his parents, Weaver Robinson and Frances “Shan” Nettle Robinson; and sister, Judy Pauline Robinson. The family extends a special thank you to caregivers Alicia Thurman, Leslie Whitehead, Lisa Jones, and Bethany Ayers, Ms. Brenda, and Solaris Hospice nurse, Candace Trimble. Graveside Services to be held Monday, January 18, 2020 at Bonner Cemetery at Stewards Mill, Texas with Hoppy McGilvary officiating and Rebecca Robinson Woodall accompanying with music. Pallbearers are Brian Mannen, George Robinson, Zane Robinson, Charles Marc Robinson, Jason Nettle, Chance Robinson, Marcus Moxley and Bob Nettle. Honorary pallbearers are James Whatley, Phil Whatley, Tommy Joe Robinson. No visitation or post-service gathering will be held. In lieu of flowers, the family requests donations be made to the Bonner Cemetery (contact Tommy Joe Robinson, 298 FM 488, Fairfield, TX 75840) or to the Kindness From Case Memorial Foundation at 129 S. Mount St, Fairfield, TX 75840.

Jerry Bluford Robinson, 80, of Fairfield, passed away January 16, 2021 at his residence. Jerry was born June 9, 1940 to Bonner Weaver Robinson and Frances Nettle Robinson at their home in Steward&#8217;s Mill Texas. He was a 1959 graduate of... View Obituary & Service Information

The family of Jerry Robinson created this Life Tributes page to make it easy to share your memories.

Send flowers to the Robinson family.