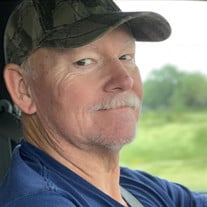 James Steven Prickett Dec. 7, 1959 – April 14, 2021 Whether you knew him as James, Steve or Steven, James Steven Prickett’s favorite thing to be called was husband or Pops. Steve born in Sinton, Texas, and like many young men answered the call of patriotism and joined the United States Air Force. His 13-year military career would take him all over Europe. While stationed at Upper Heyford Air Force Base, England, Steve heard about a country music band playing at another base three hours away. Being a Texas country boy, he made that three-hour trek, not knowing how it would change the course of his life. He saw a beautiful blue-eyed Irish girl sitting at a table with a friend across the room. Unbeknownst to him, the beautiful Irish girl spotted the tall Texan and told her friend, “I’m going to marry him.” He wasted no time crossing the room to ask her to dance, and every weekend for the next year the pair took turns making the three-hour trip to see one another. Following a year-long engagement, James Steven Prickett and Mary McGinty were married, and two years after that welcomed the most beautiful baby girl, Katherine Mae, into their lives. Baby Katie stole her daddy’s heart immediately. Steve served as a fuel system mechanic while in the Air Force. Early on in his career a superior officer impressed upon him the importance of “knowing what you’re doing before you do it.” This encounter shaped Steve into the man he was throughout his life. It spurred him to read and know every manual provided for his job, and he knew those manuals by heart. Steve’s tenacity and knowledge of those manuals earned him a medal when he was able to repair an aircraft no one else could. Shortly after being stationed in Alexandria, Louisiana, Steve was deployed to Saudi Arabia during Desert Storm. Upon his return home with a reputation as a man of great knowledge and integrity, he was offered the honor of a position serving on Air Force One. Without much thought he put his precious Katie first, and declined the position in order to raise her back home in Silver City near her grandparents. Steve utilized all the skills and integrity he gained from military service and directed them toward a 25-plus year career at Leggett & Platt, working his way into a management position. He had many hobbies over his lifetime. While in England Steve played a lot of golf and had great interest in bull terriers and dog shows. After returning to the states, he spent his time hunting and fishing. Later in life he enjoyed riding his Harley and doing toy runs for charity. He learned to play the guitar, only playing for his wife and daughter. Steve was diagnosed with stage four kidney cancer in 2017. He endured many medical procedures and much suffering through them. Stage four kidney cancer has a prognosis of months, not years. Steve defied this prognosis many times, all the while growing in his faith, sharing his testimony, and praying with friends, family, medical staff and even strangers. Over the three years and eight months Steve battled cancer, he never once complained. He and his family never hesitated to ask for prayer or share their miracles along the way. Katie recalled one such instance doctors could not explain. Steve had a tumor in one lung and was losing a lot of blood. Upon arrival at Baylor, they immediately began pre-op procedures to stop the bleeding. One of those procedures was an ultrasound to determine the source of the bleeding. They discovered the bleeding had stopped. Doctors could not explain why or how, and were amazed at what they had witnessed. Steve had always been a prayerful and faithful man of God, and he used this difficult time in his life to grow in that faith, and wanted to share his faith journey with others. Steve not only encouraged others in their faith but was very supportive of his daughter as she received her Sacraments of First Communion and Confirmation in the Catholic Church during the Easter Vigil this year. He could not have been prouder of her. Steve’s journey has been inspirational to many who have shared their experiences and how Steve impacted their life with his family. Some comments shared by friends include: “He was cherished and lived a meaningful life,” said Anne Adamski. “I’m grateful to have known him. Steve was a great guy and good friend to everyone he met.” said John Graven “He was the sweetest, humblest, and giving man” ~ Robbin Sorrells “One of the greatest honors and privileges of my life is to have served with Steve” ~ Mike Vance “He made a positive beautiful impact on Brett and I!! Big Steve showed us what a True Warrior is all about!”~ Diane Douglas :Steve has been such an awesome example of faith in action. He has really been an inspiration to a lot of people including me and I am comforted in knowing where he is going.”~ Rebecca Willis “Steve has definitely touched my heart. He is the sweetest man I have ever met,” ~ Sharon Stout “His testimony speaks for itself in the presence and strength of your faith” ~Michelle Ross Castillo “I love your dad’s faith. Steven is a Warrior indeed!” ~ Cynthis Lewis The family would like for each person who knew Steve to honor his life by living their own with the same faith Steve had in his Lord, Jesus Christ. James Steven Prickett, 61, of Barry, Texas passed from this life on Wednesday evening April 14, 2021 with his family at his side. Visitation with the family will be Thursday evening from 6-8pm at Griffin - Roughton Funeral Home. A Celebration of Life Service with Military Honors by the United States Air Force will be Friday, April 23, 2021 at 2:00pm in the Chapel at Griffin - Roughton Funeral Home with Jerry Johnson officiating. In lieu of flowers, donations may be made to Steve’s memorial fund, set up at Vera Bank in Corsicana.

James Steven Prickett Dec. 7, 1959 &#8211; April 14, 2021 Whether you knew him as James, Steve or Steven, James Steven Prickett&#8217;s favorite thing to be called was husband or Pops. Steve born in Sinton, Texas, and like many young men answered... View Obituary & Service Information

The family of James Steven Prickett created this Life Tributes page to make it easy to share your memories.

Send flowers to the Prickett family.